After the British rock band announced they would be holding a mini concert from home on Instagram, the 'All of Me' hitmaker says he'll be the next artist to do so.

AceShowbiz - John Legend is taking Chris Martin's lead in providing entertainment to those practicing social distancing amid the coronavirus pandemic. Shortly after the Coldplay frontman live-streamed a mini concert via Instagram, the "All of Me" hitmaker announced that he will also stage his own from the comfort of his home.

Coming out with the home concert idea was Martin who shared the invitation through his Twitter account on Monday, March 16. "Hello everyone. I hope you and your family are safe and healthy. If anyone feels like chatting and listening to some music, I'm going to do a livestream on the Coldplay Instagram #TogetherAtHome," he tweeted.

Hours later, Legend retweeted Martin's post and informed his devotees that he will be next. "My friend Chris Martin did a lovely little concert from home today. I'll be doing one tomorrow at 1pm Pacific time. See you soon. We'll try to get through this together! #TogetherAtHome," the coach of "The Voice" announced.

The husband of model Chrissy Teigen shared more details of his mini-concert plan in a follow-up tweet. "It'll be on Instagram Live at @johnlegend," he wrote, adding that he would accept requests. In conclusion of the post, he asked fans to let him know "which other artists I should pass the torch to." 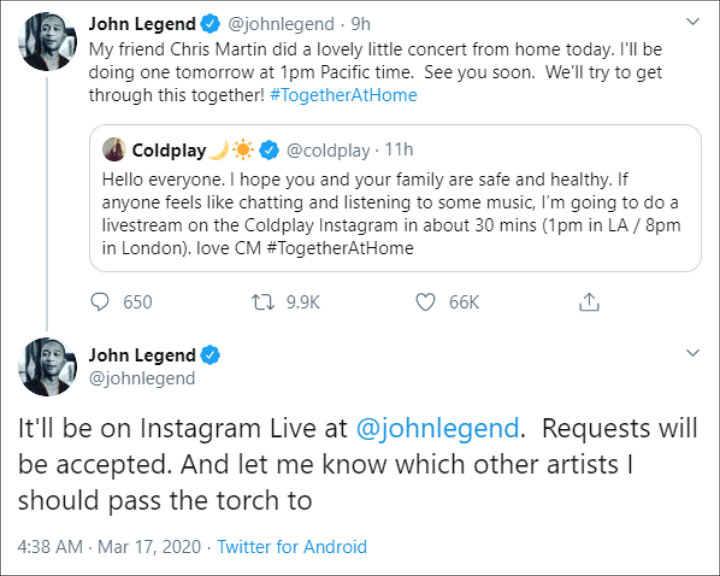 Legend's announcement has prompted singer-songwriter Jhene Aiko to tell him, "i would love to join the festivities." Her tweet got the "All of Me" hitmaker to reply, "Perfect!!" Fellow singer Chantal Kreviazuk was also left intrigued by the home concert idea as she tweeted back, "Okay. Arm twisted. I will do one tomorrow evening. Ish. Announcement to come."

On the same day Martin did his home concert, President Donald Trump released a stricter set of 15-day guidelines to help protect Americans from the spread of COVID-19. Among the instructions, all Americans are advised to avoid gathering of more than 10 people.

"Each and every one of us has a critical role to play in stopping the spread and transmission of the virus," said the President during the press conference. "If everyone makes this change or these critical changes and sacrifices now, we will rally together as one nation, and we will defeat the virus, and we’re going to have a big celebration altogether. With several weeks of focused action, we can turn the corner and turn it quickly."

John Legend Mourning the Loss of His Grandmother