The 'America's Got Talent' judge shows up on the set of the NBC competition show with extra precautions by wearing the DIY gear, days after posting a photo of quarantined person taken into an ambulance.

AceShowbiz - Howie Mandel has taken a precaution against coronavirus to a whole new level. Shortly after poking fun at what appeared to be a quarantined person, the "America's Got Talent" judge turned heads as he showed up on the set of the NBC competition show wearing a white hazmat suit and a gas mask.

The 64-year-old comedian was spotted sporting the DIY gear on Tuesday, March 10, when he arrived on the show's set that is located in Pasadena, California. Carrying a black baseball cap in one hand, he completed his bizarre look with a pair of yellow gloves. 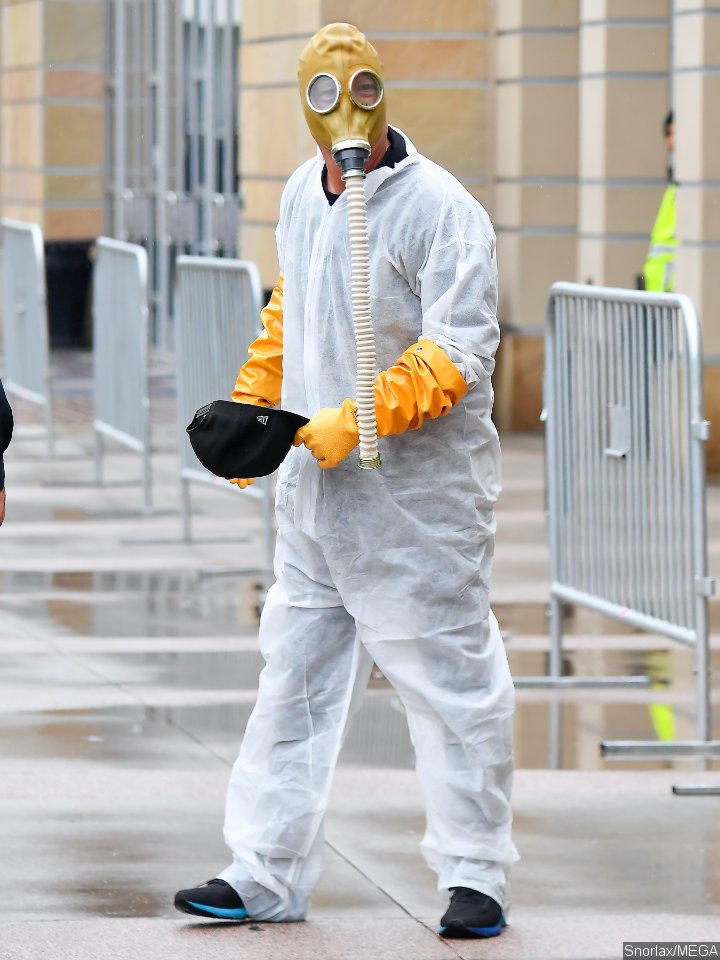 Howie Mandel stepped out in a hazmat suit and a gas mask.

While it might look a little too extra, Mandel has always been known for his germophobe tendencies as a result of his OCD. "I'm always on the verge of death in my head," he told ABC's "20/20" about his fear of germs back in 2009. "The biggest fear I have is being triggered. And if I'm triggered and I get some sort of weird thought in my head that can't go, then my day is, is stopped. My life stops."

Mandel came out with the ludicrous fashion two days after he sent Internet abuzz with his Instagram post that captured what looks like a victim of the COVID-19 being loaded into an ambulance. In the accompanying caption of the picture, the "Deal or No Deal" host simply wrote, "Me heading to work."

One person criticized Howie Mandel for joking about coronavirus victim.

Some found Mandel's humor offensive. One wrote back to him, "This isn't funny. people are dying." Another cautioned him, "Wow! Love you Howie, But won't be too funny if it gets out of control in the US," while a third stated, "If a corona virus infected patient or their family member finds this funny, then okay, it's a simple joke. Personally, I find it laughing in the face of a certain population of people."

Another one supported him.

Still, many came to Mandel's defense over the joke. "He is making a joke since he is a germaphobe", "Here comes all the offended people that don't know how to take a joke and laugh" and "To all those sensitive flowers getting offended, lighten up. Laughter is a good antidote, RELAX!" were some of the comments supporting the former "St. Elsewhere" actor.

Howie Mandel Blames 'Consensual Diarrhea' for His Collapse at Starbucks

Howie Mandel Is 'Home and Doing Better' After Collapsing at Starbucks