The whole thing started after the Chicago rapper took to his Twitter account to react to Deontay Wilder's shocking loss to Tyson Fury in the Saturday, February 22 match.

AceShowbiz - Lil Reese's weekend included him having a heated exchange with a Twitter troll who joked about him getting jumped in the past. This started after Reese reacted to Deontay Wilder's shocking loss to Tyson Fury in the Saturday, February 22 match.

"Wow fury really just beat the man," so the Chicago rapper tweeted. His tweet apparently prompted one user to comment on his remarks, reminding him that he was also jumped in the past. "When u watched the fight did you have a flashback from when u got yo a** beat?" asked the user.

The tweet unsurprisingly didn't sit well with Reese. He then hotly replied, "Suck my d**k b***h people get shot for f***in wit me dumb a** b***h I ain't sweet."

Reese added in a separate tweet, "My problem is ion give no f**k and I can't let s**t slide."

The tweet appeared to work Lil Reese up.
See also...

The troll wasn't fazed though, as she continued to troll the rapper on her account. "Reese still aint answer the question," she wrote the next day.

Her followers demanded that she stopped but she refused. "LMAOO leave dude alone," one person replied to her tweet, to which she simply responded, "F**k him."

One other suggested her to "please love yourself and stop this slander." In response, the troll appeared to say that she knew Reese in personal and things were fine between them despite the diss. "Lmfaoooo i know that man. we cool in rea life," she wrote. 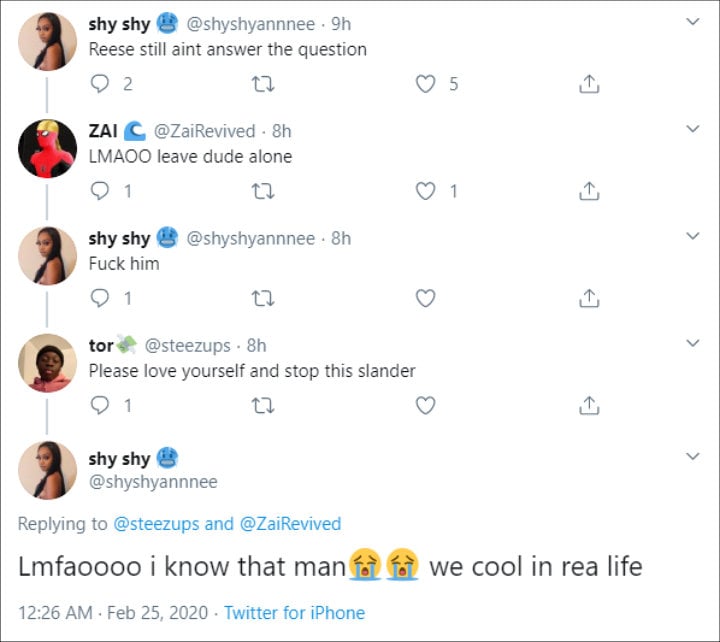 It remains to be seen when the alleged beat up took place, but Reese was shot in the neck on Monday, November 11 around 2:30 P.M. Central, in Country Club Hills, a suburb south of Chicago. He was taken to a nearby hospital by an unknown stranger and was later transferred from Advocate South Suburban Hospital to Advocate Christ Medical Center in Oak Lawn, where he was reported in critical condition.

He was released a few days later and went on Instagram Live to assure his fans that he's doing okay. Sporting a black hoodie that was zipped up to his nose, he didn't say anything in the clip and was bopping his head to Jon B's 1997 song "They Don't Know".

Lil Reese Taunts Quando Rondo for Blocking Him on Instagram

Lil Reese Unapologetic Despite Backlash Over Racist Tweet About Coronavirus

'Person of Interest' in Lil Reese Shooting Reportedly Has Been Identified