The 'Rodeo' rapper makes a surprise appearance as he walks hand-in-hand with the bride and hits the dance floor while his hit 'Old Town Road' plays in the background.

AceShowbiz - Lil Nas X just gave one newlywed couple a reception to remember. On Saturday, February 22, the "Rodeo" rapper took to his Twitter account to share a video that captured him crashing a wedding at Disney World.

In the short clip, the Grammy Award winner, who happened to be vacationing at the Orlando theme park, could be seen surprising guests when he walked into the reception hall hand-in-hand with the bride. One of the female guests could be seen exclaiming, "What the f**k is happening right now?"

For the occasion, the 20-year-old rapper rocked a white printed sweatsuit and a cowboy hat. He showed off his dance moves as soon as his hit collaboration with Billy Ray Cyrus, "Old Town Road", began playing in the background. His accompanying note for the clip simply read, "just crashed a wedding at disney world." 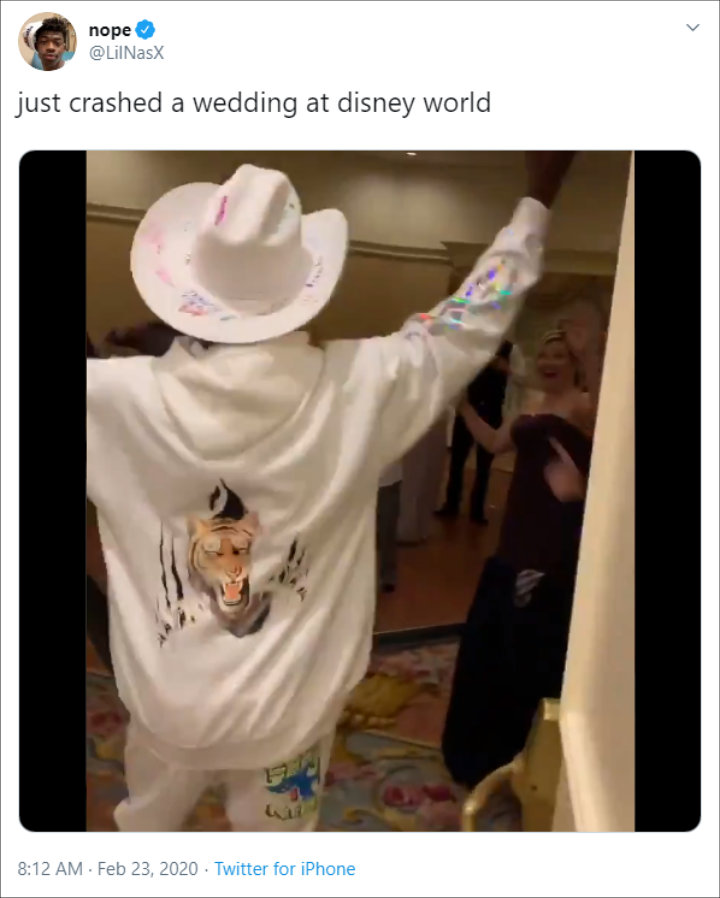 The "Panini" MC's wedding crash revelation drove many crazy with jealousy. One Twitter user said, "Crash my wedding I regret proposing to my girlfriend lol." Another wrote, "Imagine. It's the big day, the day of all days and then the universe gifts you panini man." A third jokingly tweeted, "I'd leave my man if I see you in my wedding party."

One Twitter user begged him to crash their wedding too.

One other person chimed in.

This was not the only surprise appearance the MC, whose real name is Montero Lamar Hill, made for the day. He also came to a bash thrown by Bert's Big Adventure, a charity organization which works for bringing children suffering from chronic illnesses to Disney World.

"He was so kind and thoughtful - arriving with an autographed hat for each kiddo to wear during his performance," the organization spoke of his visit on Instagram. "In addition, he graciously posed for so many photos and commemorated the evening by having the Bert's Big Adventure kiddos and siblings sign his hat too! It was an experience to last a lifetime!" They also noted that he rapped to "Old Town Road" and even "gave us all signed cowboy hats and now we get to sign HIS hat!!!"