The 'Fantasea' star says the ones gracing the front page of the magazine should have been her, Kelsey Lu, and FKA twigs because SZA, Megan, and Normani are not big enough.

AceShowbiz - Azealia Banks was not here for the cover of Rolling Stone's latest issue. It featured SZA, Megan Thee Stallion, and Normani Kordei, but Azealia said the three of them were not big enough to grace the front page.

She commented on Instagram, "The fact that this is Roc Nation trying to push a corporate narrative and that not a single one of there girls are actual stars is what is dangerous to music culture. Lmao, none of there women make music worth writing home about."

According to Azealia, the cover girls should have been her along with Kelsey Lu and FKA twigs instead of SZA, Megan, and Normani. "Btw, Sza looks like Laverne Cox," she added. "If anything it should have just been Meg." 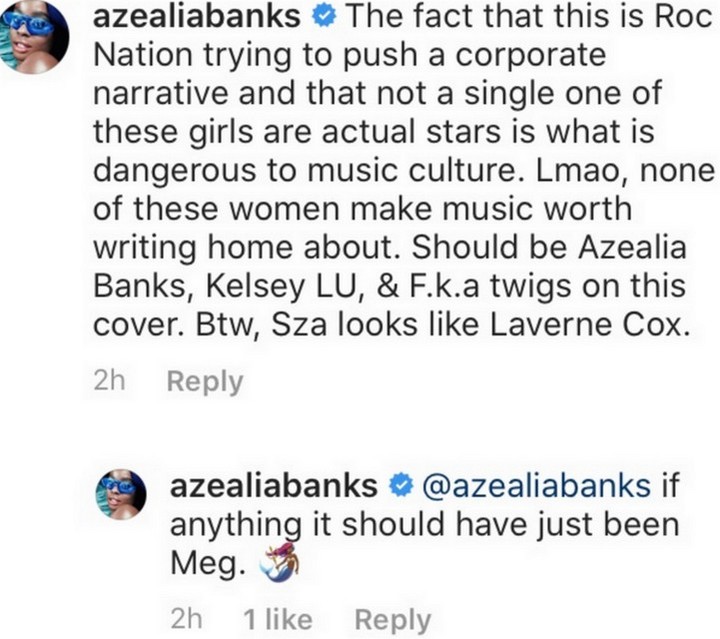 SZA was not happy with the cover either. But unlike Azealia, her problems didn't lie with the magazine's choice of the girls. "S/o Normani and meg tho," she let her fans know by giving her fellow cover girls a shout-out. "My sisters who I love very much and respect deeply. Honored to be apart of ANYTHING w the two of those BLACK QUEENS."

When a fan posted the magazine cover, SZA replied, "If u care about me delete this." She, however, didn't explain what made her unhappy when she hinted at her disappointment. She just wrote, "Not doing any videos Interviews or photos for the rest of my life lol don't ask."

She, instead, revealed her battle with anxiety in her next tweet, "My anxiety has .03% to do w outside opinion. I was bullied all through high school I could care less. It's my OWN THOUGHTS THAT HIT DIFFERENT."

Unlike SZA, both Megan and Normani posted and promoted the mag's issue. Normani gushed, "We been shaping the future [love] @RollingStone happy black history month."

Meanwhile, Megan additionally posted this cryptic message, "Trying to impress other people is not on my list of things to do lol I wake up and live my life how tf I want to."