The former Superman depicter claims that his comment was not about Ashley's looks after Twitter users blasted him for seemingly criticizing the actress' appearance.

AceShowbiz - Dean Cain has denied he's one of those cruel trolls who have mocked Ashley Judd's appearance. The actress-turned-politician was trending on Twitter on Wednesday, February 12 after a video of her with a puffy face surfaced online, prompting many to insult her over her looks.

Taking to his own account, Dean posted along with the video featuring the "A Dog's Way Home" star, "( I'm not exactly sure what to say here... I certainly have nothing positive to say, so I'll be quiet. Dean." 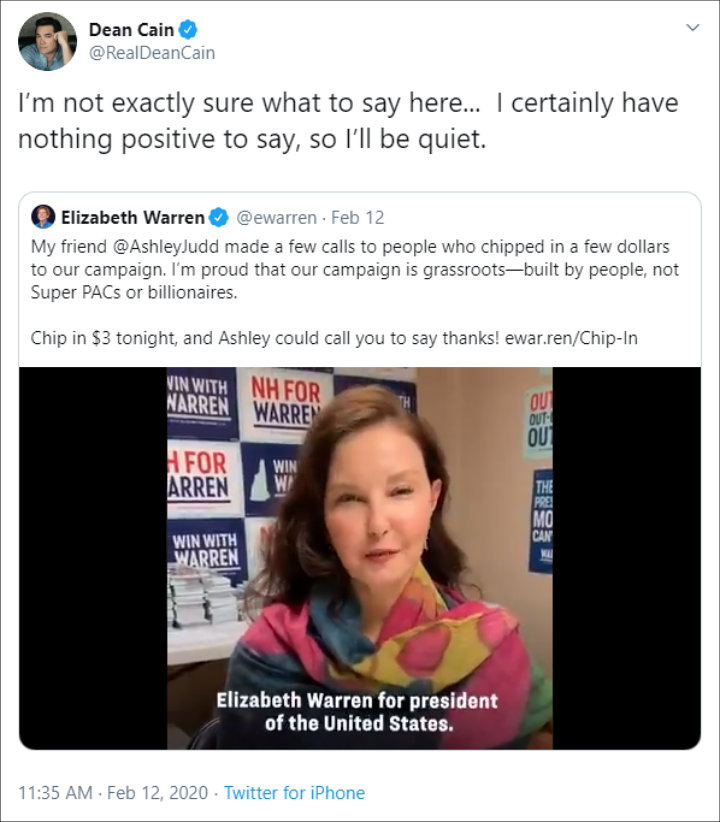 While Dean didn't get his point across, many assumed that he was talking about Ashley's appearance. A Twitter user came in the Emmy-winning actress' defense, explaining that her puffy face is the result of medication she takes to tackle sinus infection.

"She's got moon face. It's the result of steroids for the treatment of several chronic illnesses, or because of illnesses themselves. I wouldn't want to speculate," the said user wrote, while blasting Dean and other online trolls. "Unlike these other heartless bastards here. Then again, they're Dean Cairn's fans. He's a big fat 0 for brains."

Another fired back at the former "Lois & Clark: The New Adventures of Superman" star, "If you were being quiet, you wouldn't have drawn attention to it. Just be open about your hating on someone else, like all the people in the comments. Ms. Judd has chronic health problems and gets puffy from the medications sometimes. Way to be judgmental." Someone else added, "It's most likely prednisone, Mr. Washed Up Actor Trying to Stay Relevant."

But Dean has denied that his comment was about Ashley's face. "I said nothing about her looks. My problem is she supports the policies of Elizabeth Warren-but you just keep going on, making up stories," he replied to one user who slammed him. 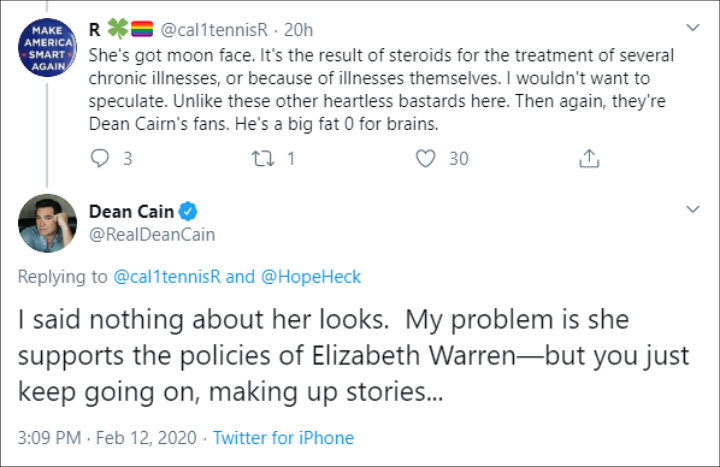 The 53-year-old added in another tweet, "I know her, and I'm very judgmental of her preferred candidate's policies. They would directly and adversely affect the nation I love and call home. You can rant about her looks all you like- thats on you." 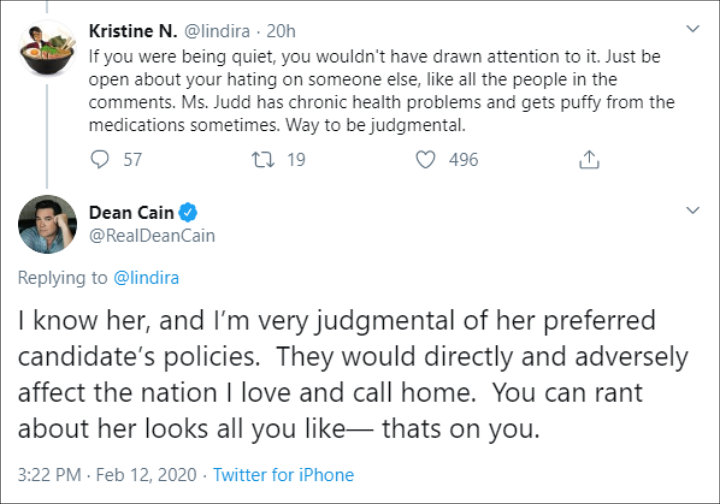 Ashley previously revealed that she was taking prednisone for health conditions, after she got "mean-spirited" comments about her looks, which many people assumed were the result of plastic surgery. "When I am sick for more than a month and on medication (multiple rounds of steroids), the accusation is that because my face looks puffy, I have 'clearly had work done,' " she wrote.

Her rep also explained at the time, "Ashley has been battling an ongoing, serious sinus infection and flu. Therefore, Ashley has been on a heavy dose of medication to overcome it so she could get on a plane and travel to Toronto and New York to fulfill her commitment of completing four consecutive days of press to promote her new show, 'Missing'."