Also showing her support is 'Top Chef' host Padma Lakshmi who posted a photo of herself on Instagram wearing the former San Francisco 49ers quarterback's jersey ahead of the big game.

AceShowbiz - Ava DuVernay is a loyal supporter of Colin Kaepernick. Amid controversies over the National Football League's treatment towards the athlete, the filmmaker declares on Twitter that she won't watch the Super Bowl LIV in solidarity of Kaepernick who believes he was "blacklisted" by the league due to his political stance.

The "When They See Us" director wrote on her Twitter account on Sunday, February 2, "Today during the Super Bowl, the National Football League and its allies will sanitize and co-opt a black protest movement." She went on writing alongside a link to an article of Kaepernick, "I refuse to watch that happen before my eyes as if it’s all good. Some things are worth more than an afternoon of football." 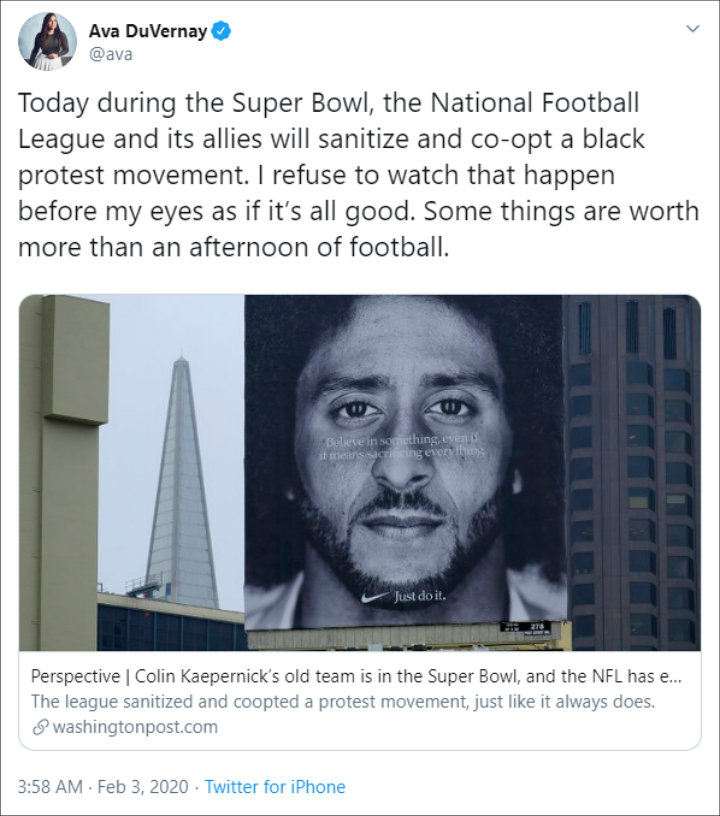 Ava DuVernay shows support for Colin Kaepernick ahead of the 2020 Super Bowl.

She further criticized the organization in another post. " 'They're trying to erase him,' said New York Giants safety Michael Thomas, a vice president with the NFL Players Association," so DuVernay tweeted about Kaepernick. "Even if you're not going to talk about the controversy, at least talk about what he did on the field--which was electrifying."

Also showing her support for Kaepernick was Padma Lakshmi. The "Top Chef" host posted a photo of herself on Instagram wearing the former San Francisco 49ers quarterback's jersey ahead of the big game. "Shout out to courage," so she captioned the post.

"When people ask me who I'm cheering for, I say [Kaepernick]," one follower wrote in the comment section. "Yasssss queen!!" added a supporter with someone else saying, "I've been rockin' my 7 [Kaepernick's jersey number] tee!!"

Kaepernick's absence continues in the 2020 Super Bowl. He claimed that he was unsigned by NFL and its 32 teams after he started player protests by kneeling during the national anthem to call attention to racial injustices such as police brutality against people of color back in 2016.

Ava DuVernay: I Grew Up Knowing Police Were Not Here to Protect Me