Taking part in the viral Dolly Patron challenge, the Detroit rapper uses a naked photo of himself holding a dynamite to cover his private parts as his profile photo on Grindr.

AceShowbiz - There's a new challenge going on social media. People have been participating in a viral challenge that was started by Dolly Parton in which they post four photos of themselves corresponding to different social media platforms. Celebrities have also joined the fun, including Eminem, though his take on the challenge isn't well received by one platform.

Em took to social media on Friday, January 24 to share his submission to the viral meme. For his photo on LinkedIn, the Detroit rapper looks all proper in a white shirt and tie, while his Facebook profile pic shows a more recent shot of him staring straight at the camera. As for Instagram, he uses a photo of himself dressed as Santa Claus "assaulting" a reindeer from behind.

The last panel of the meme should be a Tinder profile photo. But rather than the dating site, Em switches it to Grindr, a popular dating app for gays. In the last panel, he puts a naked photo of himself holding a dynamite to cover his private parts. "Did I do this right?" he wrote in the caption.

Many found his take funny and were laughing to it, but Grindr wasn't one of them. Instead, the dating site apparently took offend and shaded the rapper through its official Twitter account, "Who?" 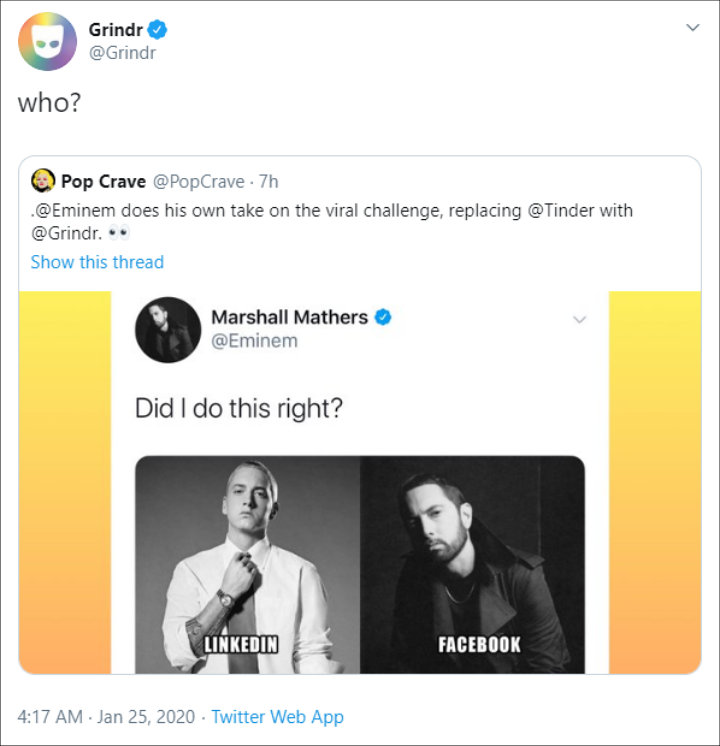 Besides Em, other celebrities who have joined the meme include Naomi Campbell, Janet Jackson, Miley Cyrus, Chelsea Handler and Celine Dion. Jennifer Garner also took part in the challenge, prompting "The Bachelorette" alum Tyler Cameron to shoot his shot at the actress. When one fan told the 47-year-old that she should have "switched the Instagram and Tinder pics," she wittily responded, "Shoot, is THAT why no one swipes?" Her reply earned a response from Tyler who wrote, "I'm still swiping right."

From Doughnut Licking to Smuggling Illegal Drugs, These Are Ridiculous Celebrity Arrests