Assuring fans that he is 'doing much better', the 'Arrow' star urges fans to take a listen to his mental health discussion on Michael Rosenbaum's 'Inside of You' podcast.

AceShowbiz - "Arrow" star Stephen Amell has explained his behaviour on a new podcast, revealing he suffered a panic attack.

The actor had to cut short a recent taped appearance on Michael Rosenbaum's "Inside of You" podcast while discussing mental health, and has now explained on Twitter what led to his sudden walk-out.

"I did Rosey's podcast after Arrow ended," he writes. "We had to cut it short because I had a full on panic attack. It wasn't pretty. I came back a few weeks ago to chat about it."

"I was in a really bad spot and I'm happy to report that I'm doing much better. Listen please." 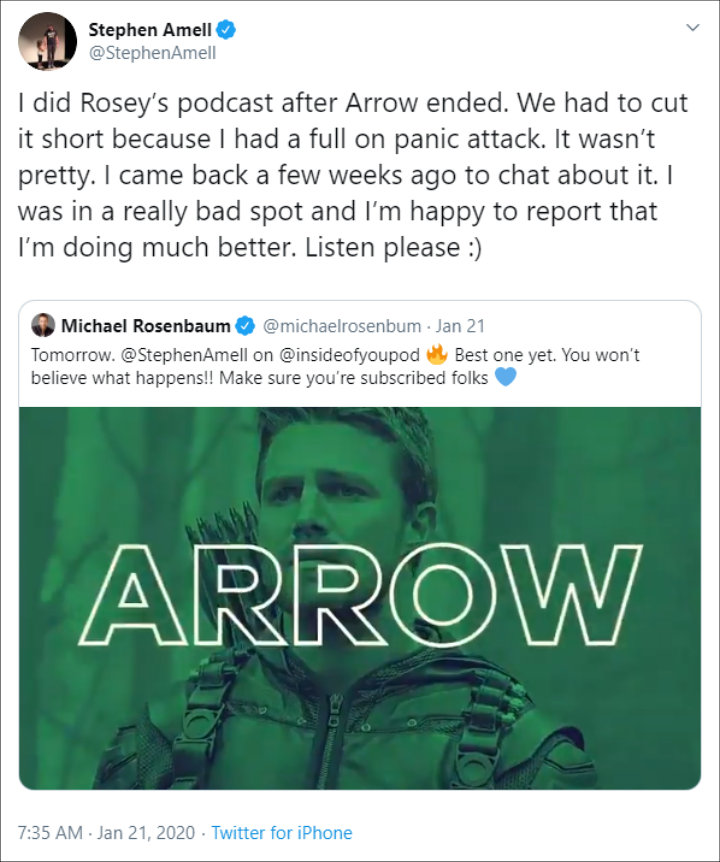 Stephen Amell opens up about his panic attack.

Meanwhile, an online description of the episode reads: "Coming off the ending of his 8 year tenure with "Arrow", Stephen opens up a lot about being at his wits' end and being completely burnt out mentally, physically, and emotionally. This all leads to Stephen suffering a panic attack mid show... leaving in an unprecedented manner... and then returning with enough bravery to re-address his current mental health."