Instead of a balding head and clean-shaven face, the 'Fantastic Beasts and Where to Find Them' actor rocks silver hair and facial hair when he's spotted out and about in Los Angeles.

AceShowbiz - Colin Farrell's the Penguin is about to get a major twist from previous incarnations of the character. Unlike the original depiction in the comic books and Danny DeVito's version of the villainous character, the "Dumbo" star's version in "The Batman" is likely to get more hairy.

While Warner Bros. Pictures has not released any official photos of the upcoming movie, some leaked pictures from the set have offered glimpses of Farrell's and Robert Pattinson's character in the superhero film. Now, a closer and clearer look at the Irish actor has landed online, showing his physical transformation for the villainous role.

On Friday, January 17, the 43-year-old was spotted out and about in Los Angeles to grab some coffee. Holding two Starbucks cups, he rocked silver hair and mustache while keeping himself warm in a dark gray T-shirt, a black jacket, Adidas track pants and khaki shoes. 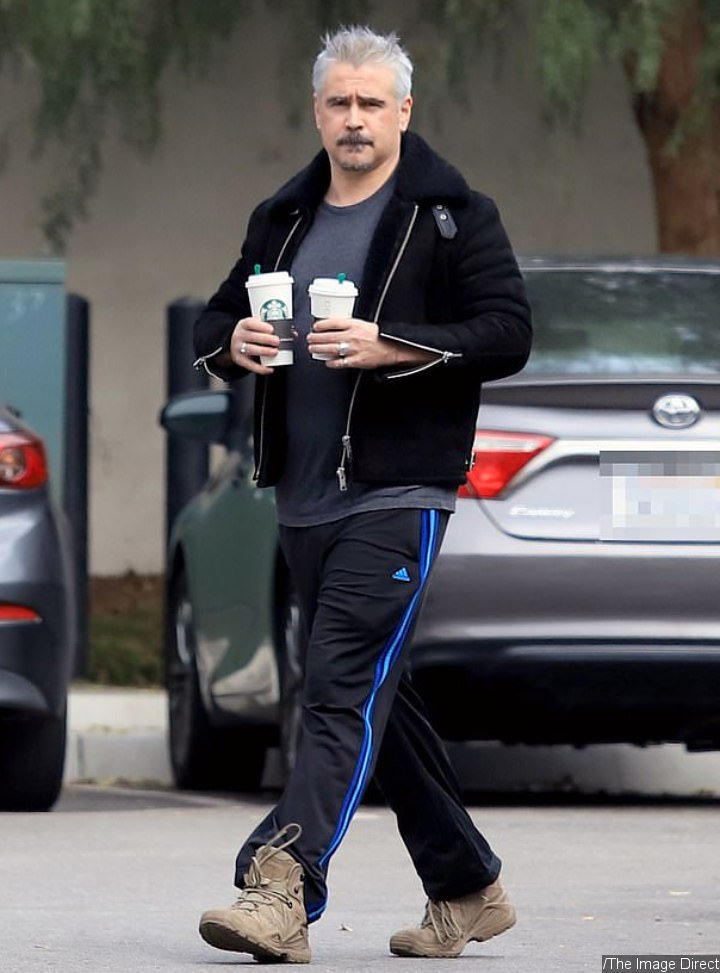 Colin Farrell was spotted out and about in L.A. on Friday, January 17.

While he was not pictured on the set of "The Batman" at the time, it is believed that his newly-dyed hair and his facial hair are for his role as the Penguin since he's currently filming the Matt Reeves-directed film.

Farrell's look is a major change to previous interpretations of the character. In the comic books and in the 1992 live-action film "Batman Returns", the alter ego of Oswald Cobblepot always sports balding head and clean-shaven face. The character is also known for his signature weapon of choice, an umbrella, which Farrell's version will likely still maintain in the upcoming movie.

"The Batman" will focus on a younger Bruce Wayne (Pattinson) than he was in previous movies. Reeves previously shared his vision for the new Batman movie, "It's more Batman in his detective mode than we've seen in the films." He added, "I'd love this to be one where when we go on that journey of tracking down the criminals and trying to solve a crime, it's going to allow his character to have an arc so that he can go through a transformation."

Principal photography began earlier this month, with Zoe Kravitz joining the cast as Catwoman. Paul Dano is tapped to play Batman's villain The Riddler, Jeffrey Wright is said to play James Gordon, and Peter Sarsgaard is cast in a mystery role, with fans speculating that he might be portraying District Attorney Harvey Dent, who becomes the villain Two-Face.