A number of fans have expressed their disappointment at the 'Stronger' rapper after it was announced that his gospel troupe would headline Awaken 2020 in Tempe, Arizona.

AceShowbiz - Kanye West has booked his Sunday Service choir to sing at a controversial evangelical event this weekend.

The rapper's gospel troupe is headed to Tempe, Arizona on Saturday (January 18) to perform in the Sun Devil Stadium at Awaken 2020, a religious gathering that has sparked outrage from the LGBTQ community for its lineup of speakers.

Cindy Jacobs, who has been openly hostile towards gay marriage, and Lou Engle, an advocate of Uganda's anti-homosexuality bill, are slated to speak.

"We believe Kanye is a sign to this nation that in a moment, thousands and thousands can be swept into the kingdom when (God) converts key people and their voices will be like thunder," Engle told The Western Journal of the Sunday Service booking at Awaken 2020.

However, fans online have expressed disappointment Kanye has agreed to allow the choir to perform at the religious gathering.

"People will still stan (stalk) Kanye despite him legitimizing and supporting radical anti-LGBTQ evangelicals/bigots," one fan wrote on Twitter, while another fumed: "What a f**king a**hole". 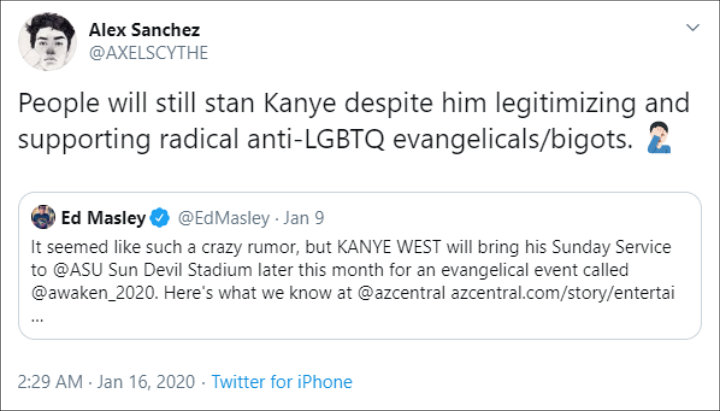 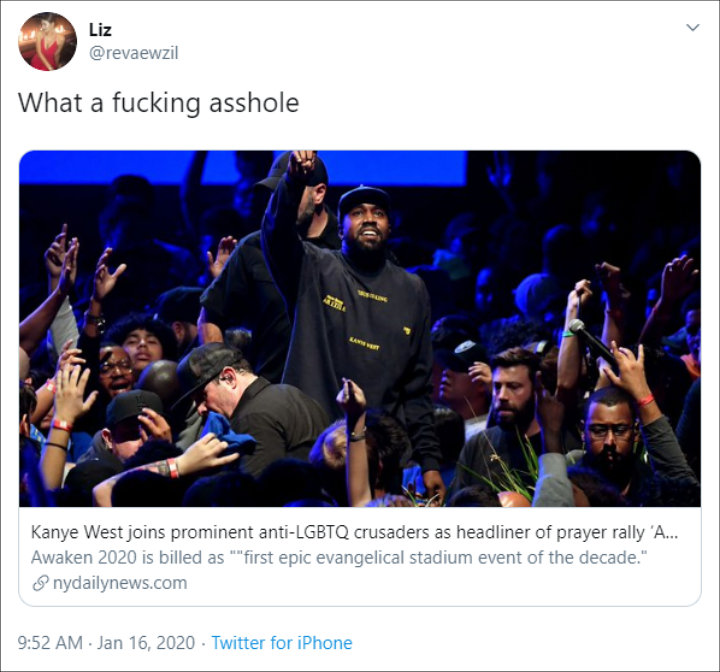 Kanye is rumoured to be taking his Sunday Service choir on a world tour later this year.

Kate Upton: Breastfeeding Was Sucking the Energy Away From Me