The WWE star challenges the 'Despacito' hitmaker for a match on the ring after an image of Justin about to faceplant off his unicycle goes viral on Internet.

AceShowbiz - John Cena wants to take on Justin Bieber in the ring. The WWE star has issued a face-off challenge to the "What Do You Mean" hitmaker after being asked if he had seen a viral meme that saw a picture of the singer about to faceplant off his unicycle being edited onto an image of him laying on a wrestling mat during a match.

The 42-year-old wrestler-turned-actor stopped by "The Talk" on Wednesday, January 15 when the topic was brought up. Asked by co-host Carrie Ann Inaba what would he say if the 25-year-old singer "is looking for a piece" him in the ring, he responded, "OK, the interview is going to take a little bit of a turn."

"Justin Bieber, if that is even your real name," the ex-fiance of fellow wrestler Nikki Bella continued saying to the camera. "I know you're going to see me in 'Dolittle', but if you see me on the streets, we'll do far from little."

"Yeah, that's right. If it's a face-off you want, you can find me at WrestleMania," he added, before turning the challenge into a witty invitation, "we'll go through the whole song and dance, which pretty much means - you serenading me with your beautiful voice and then teaching me how to dance."

One week earlier, the "Blockers" star shared his thought on the aforementioned meme. Along with a screenshot of Bieber's viral post, he tweeted on January 6, "There is a lesson to be learned in every failure (unicycles included!!). The lesson here may be U didn't C ME! Congratulations on the new single! @JustinBieber." 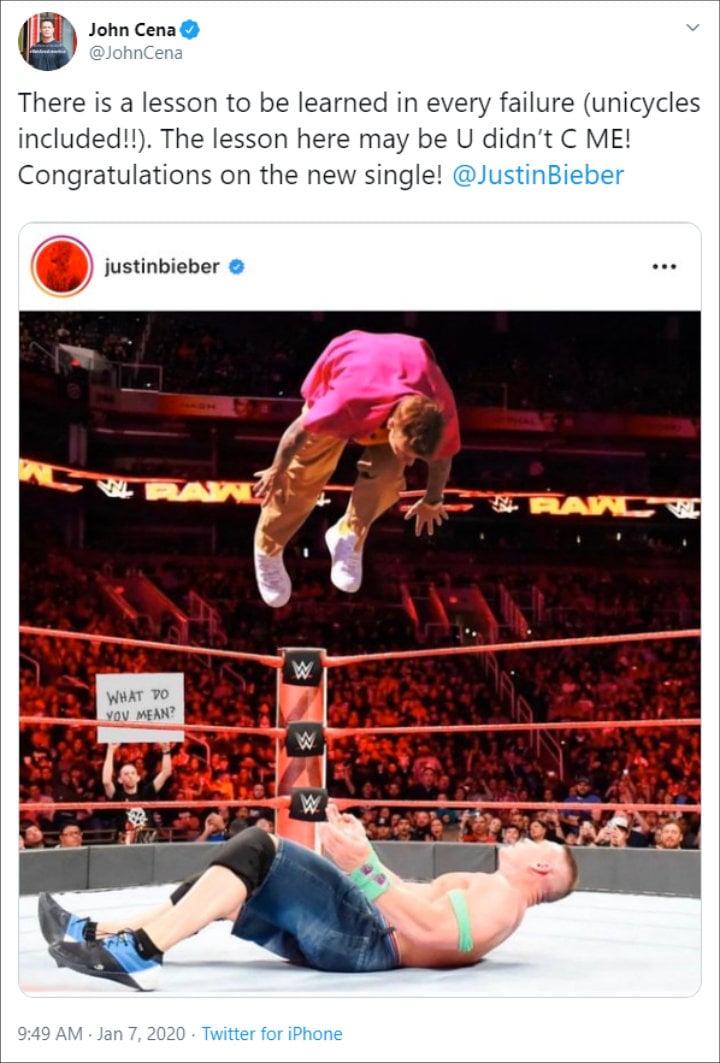 John Cena adressed the viral meme on his Twitter.

Cena was not the only sportsman extending a challenge invitation to Bieber in 2020. Earlier this month, St. Louis Blues goaltender Jordan Binnington invited the "Baby" hitmaker to have a shootout showdown with him after the latter made public a video of him scoring a goal while playing hockey. "10 breakaways me vs. you. You score on me and I'll dye my hair platinum blond," the NHL player wrote.

John Cena Insists Acting Career Not A Transition From Wrestling