Amid backlash at the network's decision to remove a commercial that featured a same-sex couple, the former 'One Tree Hill' actress shared her story of 'being penalized for standing up.'

AceShowbiz - A representative for the Hallmark Channel has denied Hilarie Burton ever worked with the company following her allegations she was "let go" from a project after making complaints about the network's lack of inclusivity.

The network came under fire over the weekend (December 14-15) for removing a commercial from wedding registry company Zola, which featured a same-sex couple on their big day.

The former "One Tree Hill" actress was among the stars who took to social media to have their say on the scandal, as she dug up emails from the network from January.

"Just going through some old emails from a #Hallmark job I was 'let go' from back in January. I had insisted on a LGBTQ character, an interracial couple and diverse casting," she tweeted. "I was polite, direct and professional. But after the execs gave their notes on the script and NONE of my requests were honoured, I was told 'take it or leave it.'"

"I left it. And the paycheck. S**tty being penalised for standing up for inclusivity." 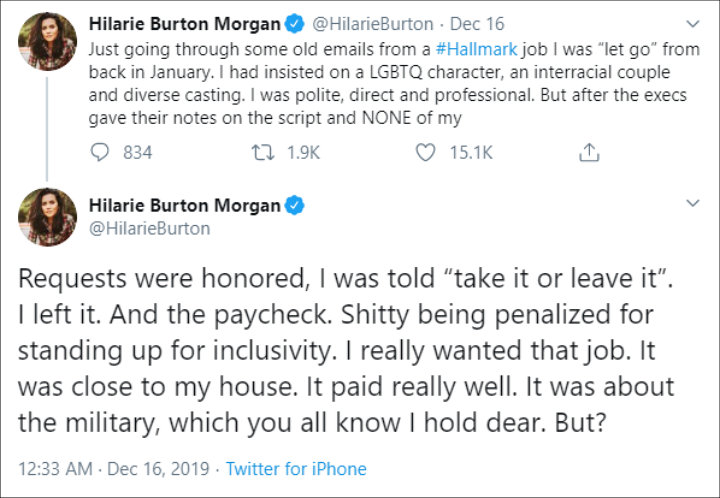 Hilarie Burton claimed she was fired by Hallmark after making complaints.

However, a representative for the network insisted Burton was never associated with any project, telling Fox News: "Hilarie Burton was not an employee of Crown Media Family Networks."

While Burton has yet to respond to the claims, Hallmark CEO Mike Perry admitting Crown Media Family Networks, who own Hallmark, had made a mistake in withdrawing the ads.

"As the CEO of Hallmark, I am sorry for the hurt and disappointment this has caused," he said. "The Hallmark Channel will be reaching out to Zola to reestablish our partnership and reinstate the commercials."

Joel Osteen Talks Kanye West Friendship: This World of Faith Is New to Him

Hilarie Burton and Kids Collecting Dandelions to Make Her Own Wine