'I hope that you all can forgive me while I recover,' writes the 'Truth Hurts' hitmaker on Twitter as she explains that she has been sidelined with the flu.

AceShowbiz - Hip-hop star Lizzo was forced to pull out of a gig in Boston, Massachusetts on Sunday night, December 15, after falling ill.

The "Truth Hurts" hitmaker took to Twitter hours before showtime to reveal she had been sidelined with the flu - and would no longer be able to perform as planned at Kiss 108's Jingle Ball event.

"I am so sorry I have to cancel tonight's show due to the flu," she tweeted.

"I hate letting my fans down more than anything. I hope that you all can forgive me while I recover and I promise we are doing everything we can to make it up to you."

Sympathising with the singer, a representative for the event reposted the announcement and replied, "We (love) you @lizzo! Feel better! #Kiss108JingleBall". 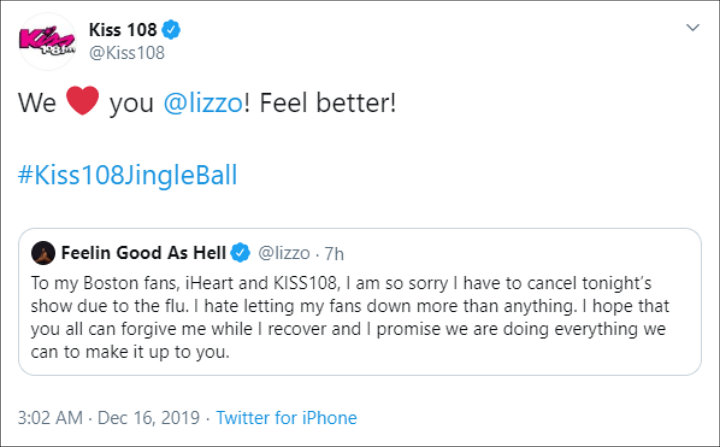 Lizzo apologizes for canceling her Jingle Ball performance in Boston.

Halsey, Niall Horan and 5 Seconds of Summer were also featured on the bill for the festive show.

Jeannie Mai Responds to Fan's NSFW Comment About Her and Jeezy

Lizzo Hangs Out With 'BFF' BTS at Harry Styles' Concert in L.A.

Ten Musicians Who Throw Shades at Exes Through Their Songs

Little Simz Picks Up Album of the Year Honor