In addition to announcing the news during a chat with fans on Twitter, Twisted Sister star Dee Snider also offers fans an update on Brian Johnson's hearing condition.

AceShowbiz - AC/DC are working on a new album featuring tracks Malcolm Young recorded before his death in 2017, according to Twisted Sister star Dee Snider.

The "We're Not Gonna Take It" rocker was asked if he knew anything about AC/DC's recording plans during a chat with fans on Twitter and revealed the band's next album will also feature "all four surviving members."

Citing a recent meeting with Brian Johnson, who was forced to sit out much of the group's most recent world tour due to hearing issues, Dee tweeted: "RIP Malcolm Young. But all four surviving members have reunited with tracks recorded by Malcolm while he was still alive."

"Malcolm's nephew Stevie Young is replacing him (he's done this a couple of times before). It's as close as you can get to the original band." 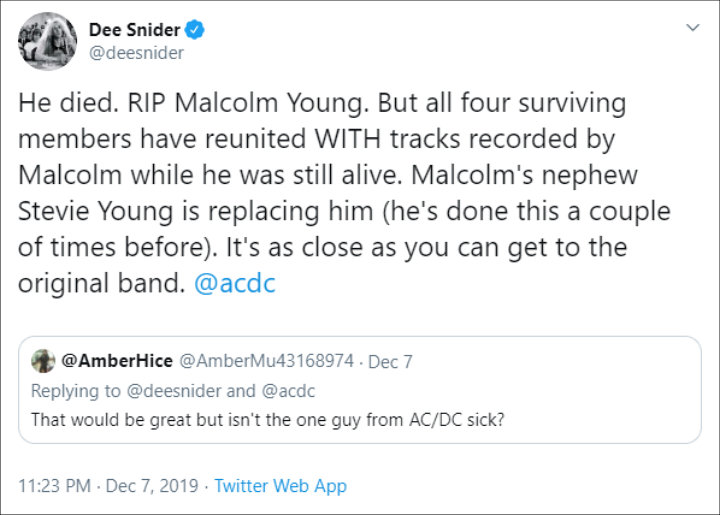 As of his brother's death and Johnson's departure, Angus Young was the band's only original remaining member.

Back in 2016, following Malcolm's exit from the band, Angus told fans he wasn't sure if the band would continue beyond the "Rock or Bust" tour.