In related news, Jay reportedly sues an Australian children's author for 'deliberately and knowingly' profiting from his brand and likeness through her picture book titled 'AB to Jay-Z'.

On Thursday, November 28, Hov was involved in a back and forth with a hater who seemingly thought that the music mogul's career was made by his popular wife Beyonce Knowles. "Hov cant go on a stadium tour without Beyonce. Beyonce can go on one by herself tho," the person wrote on the blue bird app.

Hitting back at the troll, Hov replied through his burner account, "I see what you're trying to do here, kudos, but you should have said 'Hov can't sell-out a stadium tour alone.' Because he had done two sold-out stadium tours previous to OTR series; with Em and then JT. But go off!! Cheers to The Carters. Forever together." 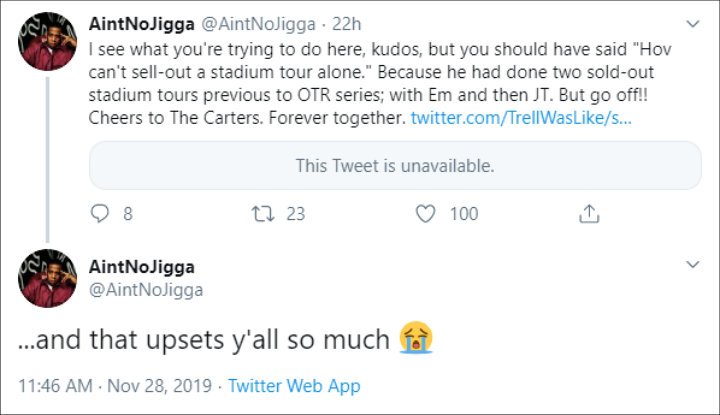 He also responded to another user who asked if Jay had "done any alone and sold out," writing, "No, and I never said he had or would be able to. Just trying to help y'all be facts-based petty. Enjoy your day." Jay also insisted that he does "great tour numbers for a rapper" before adding, "nd has for a sustained period of time. We ain't worried about ticket sales over here tbh, the fact he has been selling out venues across the world for 23 years is testament to his standing."

Unfortunately, the troll wasn't alone. Some other users seemed to share sentiments with one saying, "When we gone admit that Beyonce saved Jay-Z music career?" Meanwhile, another one tweeted, "Beyonce makes @AintNoJigga relevant."

In related news, Jay reportedly sued an Australian children's author, who is the founder of book and clothing retailer "The Little Homie". The rapper claimed that Jessica Chiha's "AB to Jay-Z" picture boook was "deliberately and knowingly" profiting from his brand and likeness.

"We are unbelievably disappointed to find ourselves caught in a legal battle with someone whose music we love and adore," Jessica said in response to the lawsuit. "To have someone like Jay-Z file legal proceedings is daunting beyond belief and hugely dispiriting."

"We maintain we have done nothing wrong and intend to give it everything we've got for common sense and common good to prevail, to the extent we can fight the fight," she continued in her statement.

Jay-Z Accused of Doing His Business 'Dirty' by Damon Dash

Watch: Jay-Z Snatches Man's Phone for Trying to Record Him and Beyonce at Diddy's Birthday Bash

Jay-Z Gets Handsy With Aaliyah in Never-Before-Seen Photos