'Everyone please read his story below and if you can donate I'm sure he would be so grateful,' so the reality TV star writes on her Twitter account before receiving backlash.

AceShowbiz - Kim Kardashian just wanted to help a fan pay for his medical bills, only to find herself being subjected to criticism. People were not happy with the fact that the businesswoman and reality TV star turned to her Twitter followers to ask them to also help donate instead of fully covering the medical bills herself because she's rich.

It all started after a Twitter fan let Kim know about his/her friend's condition who is suffering from a C1 Spinal Cord injury. For his recovery, the man needs to check into an intensive rehab center, but the problem is, he doesn't have the money for that. Thus, he decided to open a donation page and asked people to help him pay for the medical expenses.

Learning of this, Kim immediately shared his story on Twitter and asked, "Everyone please read his story below and if you can donate I'm sure he would be so grateful." 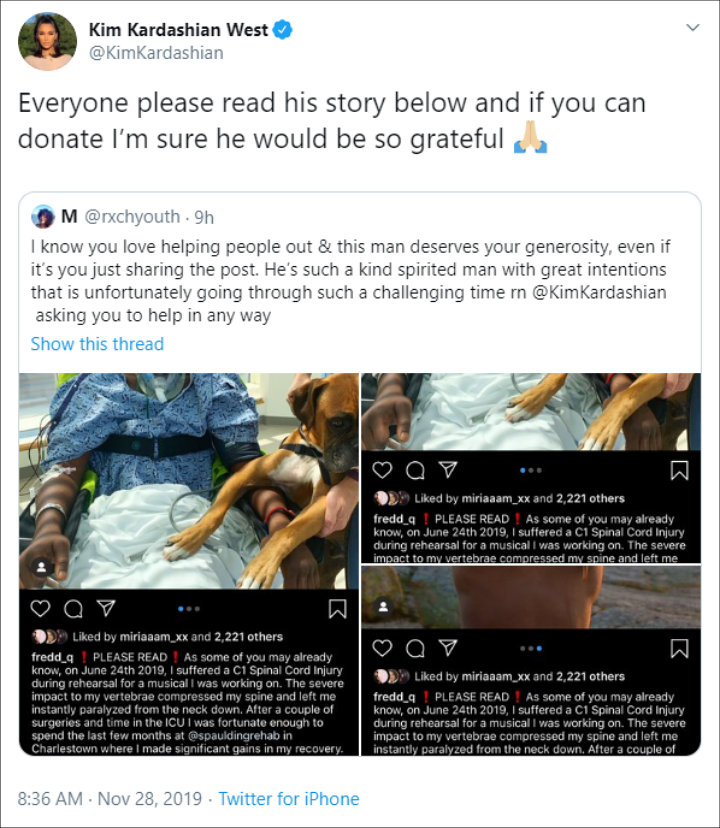 But the response she received wasn't something that she expected. Angry followers pointed out that the "Keeping Up with the Kardashians" star could pay for the medical bills herself, but she chose to ask her online devotees instead. "Rich people are so weird can you please help this man? Kim sweetheart you're wealthy your husband is a billionaire. You help," one wrote.

Another said, "Just pay for it yourself. Tell your religious husband to pay for it since he's so all about the 'people.' Even though he bought property where there are no taxes... shady." Someone similarly commented, "Kim, YOU have enough money to pay for all of it. Don't you think if his post reached you, it's a sign you should take care of him? We are regular people an injury away from his situation; please redistribute your wealth."

"...You can't send him the $4000 he needs to reach his goal?" an individual wondered, with one other blasting her, "This is so embarrassing. What's $80,000 to you? Half of an Instagram post? Because I've read you make close to $1M for that kind of advertising that you do frequently. In fact your 3 most recent IG posts are advertisements. Pay for this mans treatment instead of asking US to."