In her Twitter rants, the 'Lover' singer additionally accuses former record label boss Scott Borchetta of attempting to hinder her from 're-recording copycat versions' of her old masters.

AceShowbiz - Taylor Swift has been dealt another blow over the sale of her masters - new owner Scooter Braun has reportedly banned her from performing her old hits on TV.

The "Lover" singer took to Twitter on Thursday, November 14, to alert fans to the latest development in her war with music mogul Braun and her former record label boss Scott Borchetta, who sold him the rights to her first six albums earlier this year (2019). 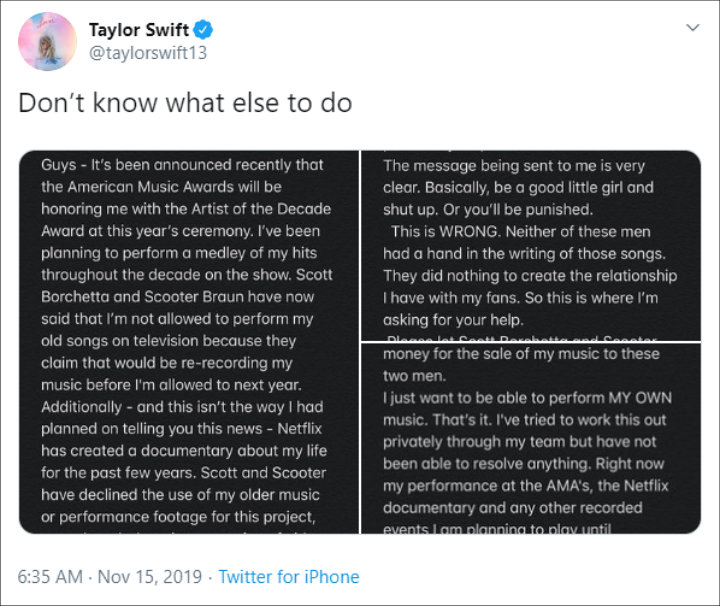 Taylor Swift asks for her fans' help after being banned from performing her old songs.

She claims the pair have blocked her from performing her old songs at the 2019 American Music Awards, where she will receive the Artist of the Decade honor, later this month.

"I've been planning to perform a medley of my hits throughout the decade on the show," she writes. "Scott Borchetta and Scooter Braun have now said that I'm not allowed to perform my old songs on television because they claim that would be re-recording my music before I'm allowed to next year."

"Additionally - and this isn't the way I had planned on telling you this news - Netflix has created a documentary about my life for the past few years. Scott and Scooter have declined the use of my older music or performance footage for this project, even though there is no mention of either of them or (former label) Big Machine Records anywhere in the film."

Taylor reveals Borchetta has told her management team that he and Braun will only allow her to use the music they now own if she agrees "to not re-record copycat versions of my songs next year" and "stop talking about him and Scooter Braun." 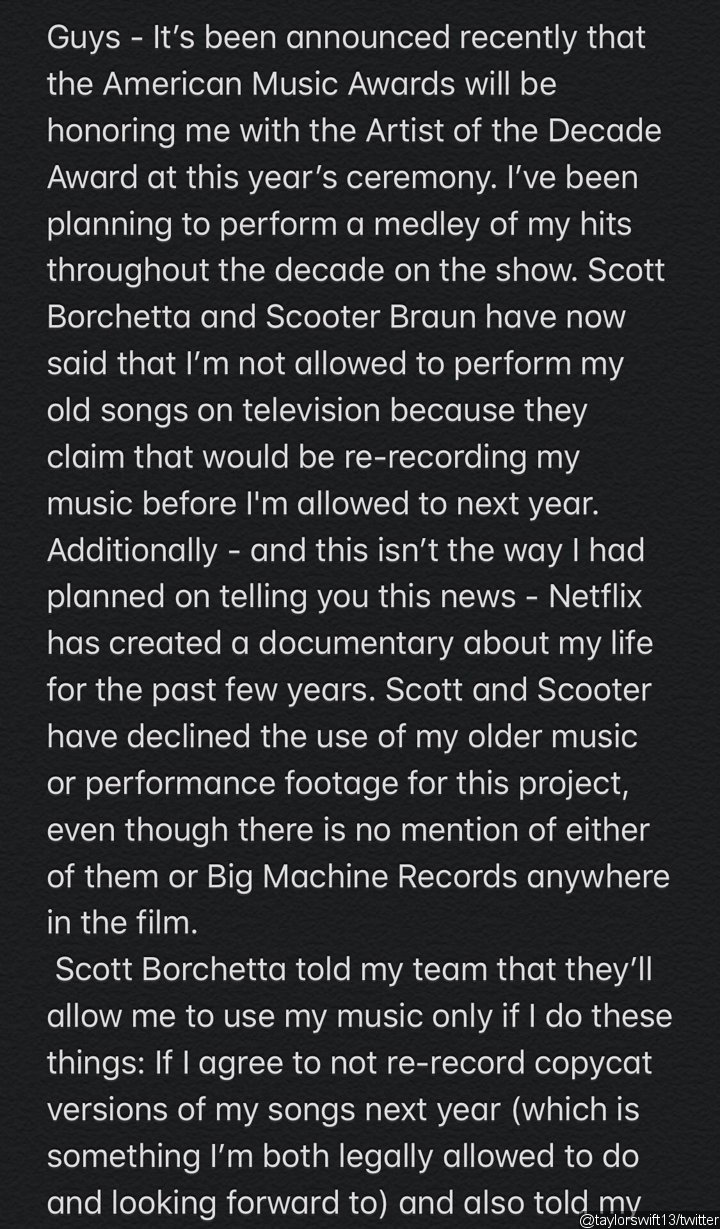 Taylor Swift explains why Scott and Scooter banned her from performing her old songs.

Swift has made it clear she does intend to re-record her hits and own the new versions, and she has been very open about her feelings for Braun and Borchetta, calling their new deal her "worst case scenario."

"I feel very strongly that sharing what is happening to me could change the awareness level for other artists and potentially help them avoid a similar fate," she tweets. "The message being sent to me is very clear. Basically, be a good little girl and shut up. Or you'll be punished."

"This is WRONG. Neither of these men had a hand in the writing of those songs. They did nothing to create the relationship I have with my fans. So this is where I'm asking for your help." 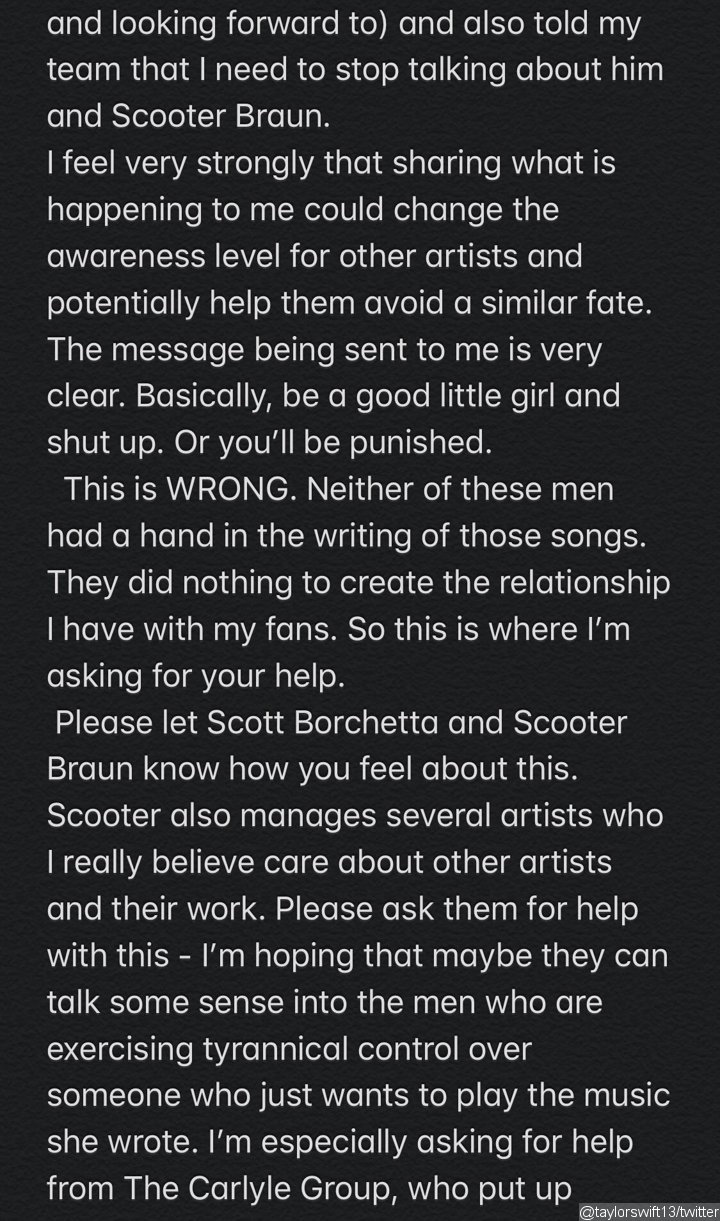 Taylor expresses her frustration towards the ban.

Swift then urges her army of devotees to "let Scott Borchetta and Scooter Braun know how you feel about this", adding, "Scooter also manages several artists who I really believe care about other artists and their work. Please ask them for help with this - I'm hoping that maybe they can talk some sense into the men who are exercising tyrannical control over someone who just wants to play the music she wrote." 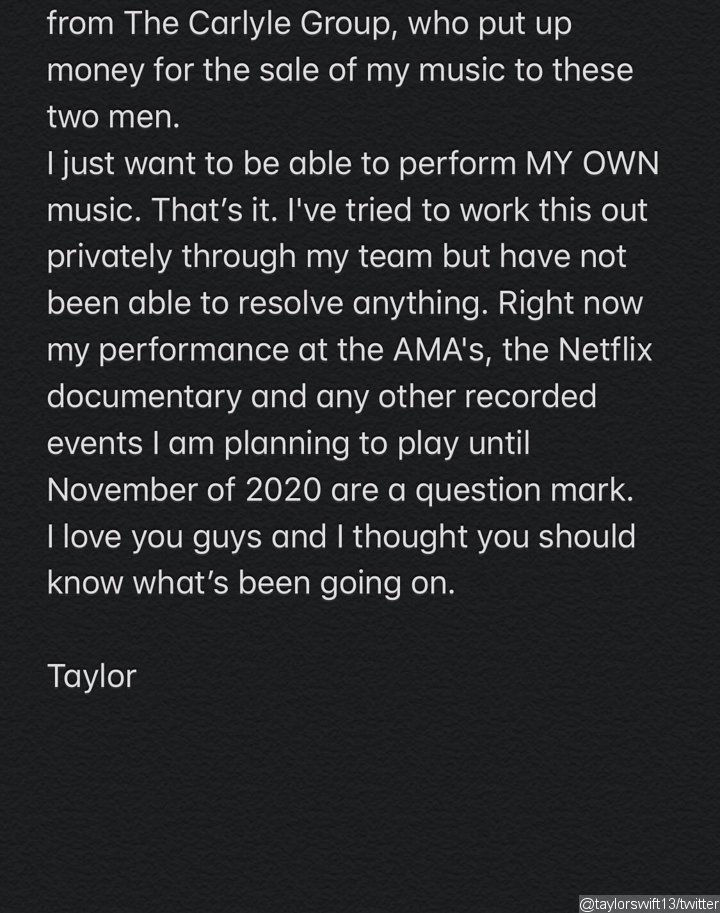 Taylor asks her fans to 'let Scott and Scooter know' about her desire to perform her old songs.

"I just want to be able to perform MY OWN music. That's it. I've tried to work this out privately through my team but have not been able to resolve anything. Right now my performance at the AMA's, the Netflix documentary and any other recorded events I am planning to play until November of 2020 are a question mark."

Joaquin Phoenix: Onscreen Gun Violence in 'Joker' Made Me Uncomfortable

Artist of the Week: Soulja Boy

Moneybagg Yo Gets His First No. 1 Album on Billboard 200 Chart With 'A Gangsta's Pain'