Here's How Lizzo Reacts to Mariah Carey's Stamp of Approval

The 'Truth Hurts' hitmaker has taken to Twitter to share her excitement upon discovering that the 'Touch My Body' singer namechecked her in a magazine interview.

AceShowbiz - Lizzo was lost for words when she discovered Mariah Carey namechecked her in a recent magazine interview.

The star came across the magazine feature, in which "Touch My Body" star Mariah was asked, "Which up-and-coming singer should I listen to?"

In the chat, the star replied, "Lizzo," and the singer/rapper took to Twitter to share her excitement at getting the diva's "stamp of approval".

"I got the @MariahCarey stamp of approval b**ch oooooohhhh my goooooooooooooodness," the "Juice" hitmaker tweeted alongside a snap of the interview segment on Saturday, November 9.

Ensuring the star knew her words were sincere, Mariah wrote back to Lizzo, insisting, "You don't need my stamp, you're 100% that b**ch!!!!" - referencing the opening lines from her chart-topping hit, "Truth Hurts".

She responded: "ilysm (I love you so much)." 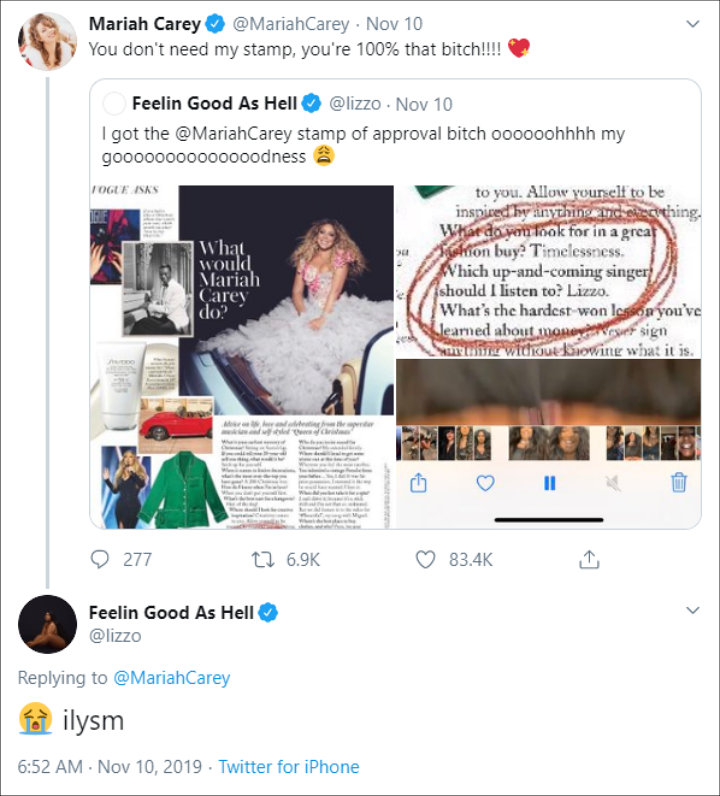 Lizzo thanks Mariah Carey for her 'stamp of approval'