Photos of the actress, who plays Thena, and fellow cast members Gemma Chan as well as Brian Tyree Henry surface after reports of a bomb scare on the set of the Marvel movie.

AceShowbiz - First look at Angelina Jolie and her "The Eternals" co-stars, Gemma Chan and Brian Tyree Henry, in their superhero suits have surfaced online. The actors were spotted in characters they continued filming the Marvel movie on Tuesday, November 5.

The pictures, obtained by Daily Mail, were taken during the shooting on the beach set. Though blurry, they still reveal Jolie in Thena's golden armor while she also sported a blonde wig. Chan donned a green suit as Sersi, while Henry wore a purple suit as Phastos. 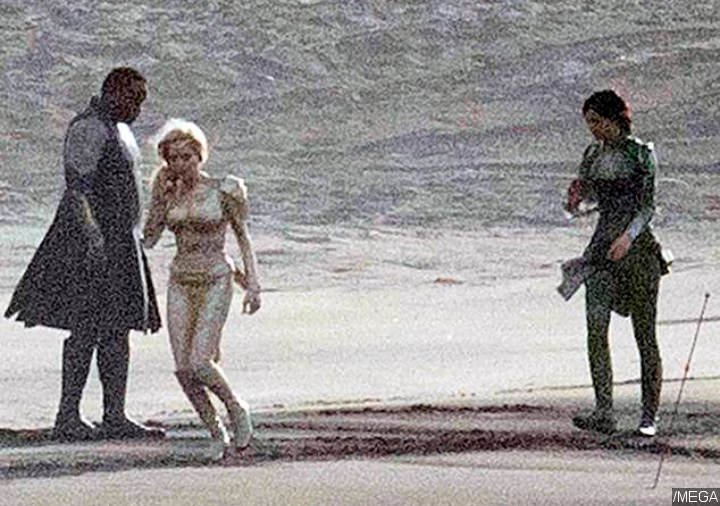 The photos emerged after it was reported that Jolie and Richard Madden were evacuated from the set on the Canary Island of Fuerteventura due to a bomb scare. An unexploded bomb was found on the island and everyone was ordered back to a safe distance.

"It was obviously terrifying - the bomb could have been there for decades untouched but who knows what might have happened if it was disturbed," a set insider told The Sun. "Some of the biggest stars in the world were on set and nobody was taking any chances. Fortunately, experts dealt with it." It's believed that the bomb dates from World War II, when the Nazis had a base on the island.

Madden, who was not spotted during the filming with Jolie, Chan and Henry, portrays Ikaris. Other stars in the movie include Salma Hayek, Kit Harington, Kumail Nanjiani, Lauren Ridloff and Don Lee a.k.a. Ma Dong Seok.

Based on Marvel comic created by Jack Kirby in 1976, "The Eternals" is about near-immortal beings the Eternals and their more gargantuan antagonists the Deviants, who were created by the cosmic beings called Celestials. The Celestials experimented on humans creating both races of immortal spinoffs.

Chloe Zhao serves behind the lens, with the script written by Matthew K. Firpo and Ryan Firpo. The movie is slated for a November 6, 2020 release in the United States.