The 'Little Mermaid Live!' star presses the 'like' button on a tweet raving about his performance in the ABC musical special while referencing his 'Fuller House' co-star's legal issue.

AceShowbiz - Has John Stamos changed his tune about Lori Loughlin's alleged involvement in the college admissions scandal? The actor, who previously carefully chose his words when commenting on his "Full House" co-star's legal issue, confused everyone after he liked a tweet about the actress possibly going to jail.

Following his performance in ABC's special "The Wonderful World of Disney Presents: The Little Mermaid Live!", John's verified account liked the tweet sent out by television and radio personality Gunz who raved about his acting in the musical while referencing Lori's case. The said tweet read, "Aunt Becky's going to jail but @JohnStamos is BACK and crushing it on #LittleMermaidLive." 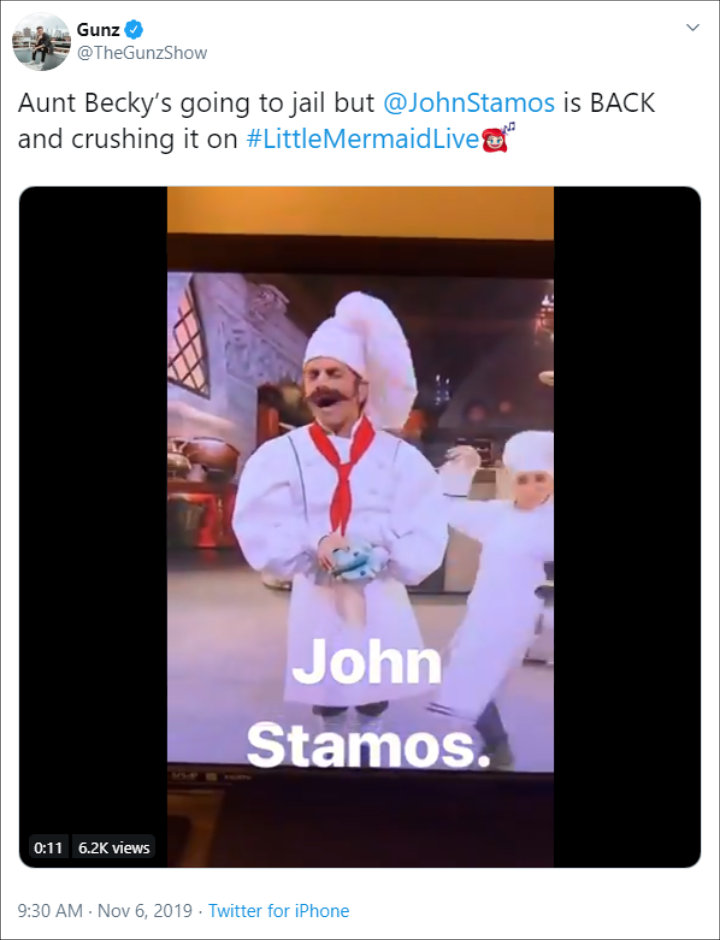 While John has not addressed why he clicked the "like" button on the tweet, a source close to the "ER" alum says that it was accidental. There was a lot of tweets praising John's performance in "The Little Mermaid Live!" and he appeared to not notice the Lori reference when he liked it. He has since unliked the tweet.

Earlier this year, John said during an interview with GQ about Lori's case, "I gotta be careful. I want to wait until the trial happens, if it does, or whatever the result is, and then talk about it. I'll tell you one thing that has been strange is: Honestly, I can't figure it out. It doesn't make sense. I talked to her the morning everything hit. I just can't process it still."

The 56-year-old added, "Whatever happened, I’m pretty sure that the punishment is not equal to the crime, if there was a crime."

Meanwhile, another "Fuller House" star, Candace Cameron Bure, publicly showed her support for Lori. "I've already said that we are family, and we stand by each other," she said on "Today" show.

Lori and her husband Mossimo Giannulli are accused of paying $500,000 to a fake charity to get their two daughters into the University of Southern California as part of the school's crew team, even though neither of them participated in the sport. They rejected a plea deal and were hit with additional charges of money laundering and conspiracy. Most recently, they were charged with conspiracy to commit federal programs bribery, to which they reportedly also plan to plead not guilty.

John Stamos and Beach Boys Team Up for Charity Song