The former 'America's Got Talent' judge shows up as a menacing alien at her annual Halloween party, joined by her husband Tom Kaulitz who dresses up as a bloody astronaut.

AceShowbiz - Heidi Klum has finally debuted her over-the-top Halloween costume after teasing it through a series of Instagram photos and videos. After 13-hour transformation which she documented on her social media posts and was able to be seen by onlookers at Amazon's Manhattan storefront, the 46-year-old arrived in time for her 20th Annual Halloween Party at Cathedrale New York on Thursday night, October 31.

The Germany beauty and her husband Tom Kaulitz made a grand entrance in a trailer with glass walls, covered in biohazard symbols. Clad in prosthetic and makeup, she turned into a menacing alien. The former Victoria's Secret Angel got into character, growling at people as they were driven up to the event. 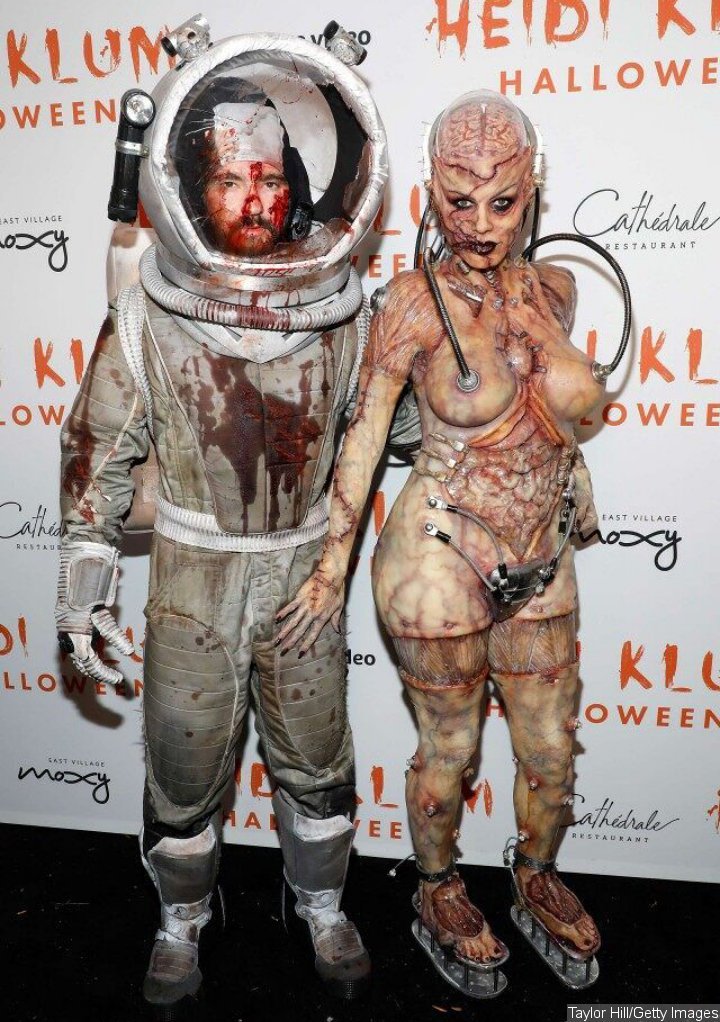 On the black carpet, she posed with her husband who dressed up as an astronaut covered in blood, with a shattered space helmet. Speaking with Entertainment Tonight, the Tokio Hotel member revealed the sci-fi backstory behind their Halloween costumes.

"So I was on a mission in outer space, looking for a new planet, because we almost destroyed ours," the rocker explained. "So I found her and I brought her back, because I thought she might have some useful information for us."

Talking about the long process for her complete transformation, Heidi shared, "I totally lost track of time today. I don't even know how long this took for me today." She sat in a chair in the window of the Amazon store on W. 34th street since Thursday morning to get her makeup done while the crowd gathered outside to get a peek of her Halloween costume.

On the other hand, Tom's astronaut costume was less time-consuming than last year's costume. "This year was easy. I was done in like four hours. So nothing compared to Shrek," he said. "I asked for a costume that took a little less time."

Heidi previously told PEOPLE when teasing about her Halloween costume, "I'm gonna have a hard time walking, and it'll take a really long time." Revealing that it's going to be a couple costume, she added of Tom's, "His is gonna be easier [than mine this year] because last year I felt so bad for him. He had never done this before, and it was harder for him than for me because he had the big belly and the face. I'm used to it, but he was like, 'Oh my god, I'm gonna die! It's so hot!' "

Heidi Klum Unable to Get Tested for Coronavirus Despite Feeling Feverish