After performing the 'Juice' rapper's 'Good as Hell' on 'The X Factor: Celebrity', Kevin McHale tweets how he felt about her not getting through to the next round of the program.

AceShowbiz - Lizzo once auditioned for U.S. TV series "The Glee Project", but didn't get through.

The programme ran alongside hit teen musical comedy-drama "Glee" and served as an audition for the series, with the top prize a minimum seven-episode arc in the following season of the much-loved show.

Despite being one of the hottest stars in the music industry today, it seems the judges on the talent show weren't impressed enough by Lizzo's audition to take her through to the next round.

Her appearance on the programme was called to attention by former "Glee" star Kevin McHale, who is currently competing in U.K. TV show "The X Factor: Celebrity".

Explaining his song choice for Saturday night's (October 26) episode of the competition, Kevin tweeted: "Tonight I performed Good as Hell by @lizzo because it's an incredible song and she's an icon and it's f**ked up she auditioned for the Glee Project and didn't make it cuz….7 weeks at #1 (sic)." 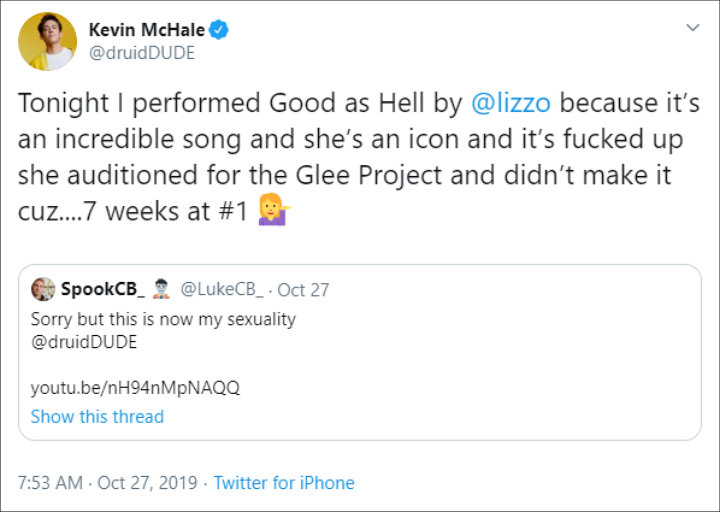 Kevin McHale said Lizzo once auditioned for 'The Glee Project'.

Following Kevin's tweet, fans managed to dig up Lizzo's original Facebook post from when she auditioned back in 2011, which saw her write at the time: "Check out my audition for The Glee Project!!! I'm so in love w/ the show and received an e-mail about an audition. Wish me luck in chicago! And WATCH AND LIKE PLEASE!!!"