The 'Without Me' singer and the 'X-Men: Dark Phoenix' actor confirm their relationship during a Los Angeles Halloween party where she channels Marilyn Manson and he dresses up as a clown.

AceShowbiz - Halsey, 25, and Evan Peters, 32, went public with their romance. The "Without Me" singer and the Quicksilver of the "X-Men" movie franchise were seen holding hands when they were leaving her Halloween party in Los Angeles recently.

The new lovebirds made no attempt to hide their affection as they were being followed by paparazzi. Halsey rocked fiery red hair and thigh-high boots while her boyfriend sported clown face makeup. They additionally wore matching ICP T-shirts.

The oversized T-shirt that she put on actually belonged to her boyfriend. In a photo she shared on Instagram, the actor was seen donning the T-shirt while she rocked a white latex bodysuit. Although their Halloween makeup made them almost look like Joker and Harley Quinn, she said she was inspired by rocker Marilyn Manson. On the caption, she called themselves "resident goths."

Halsey and Evan Peters sparked dating rumors for the first time when they were spotted going on a date at Six Flags early this month. They kept mum but fueled the rumors when she was photographed touching his face during an outing a few days ago. 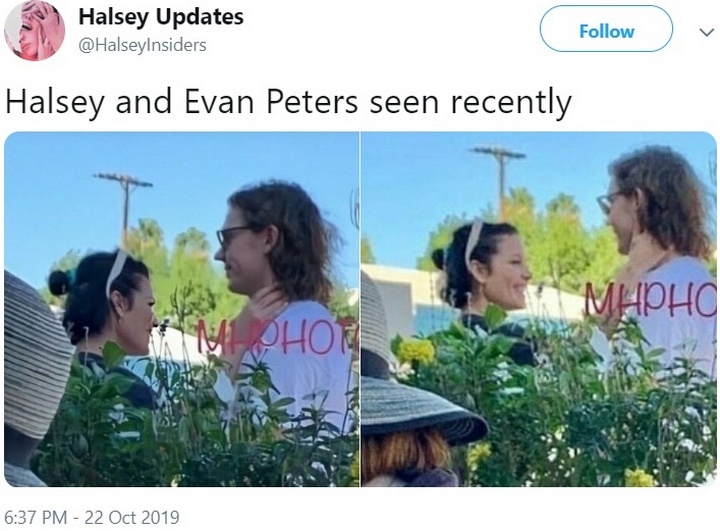 "Halsey has always been a huge fan of Evan's," a source told E! News. "A friend connected them and they had also been chatting over social media before deciding to hang out. It's still very new, but they are both interested in dating each other and hanging out."

Halsey previously dated British rock musician Yungblud and reportedly dumped him due to her hectic schedule after a year of relationship. Meanwhile, Peters was previously engaged to actress Emma Roberts. They were in an on-and-off relationship after meeting for the first time in 2012 on the set of movie "Adult World". They went their separate ways earlier this year.