The said photo, which is put in the British monarch's sitting room at the palace, was reportedly taken during the Duke and Duchess of Sussex's engagement shoot at Frogmore House, Windsor back in 2017.

AceShowbiz - Talk about a shade. Queen Elizabeth is reportedly pulling out a picture of her grandson Prince Harry and his wife Meghan Markle from her sitting room at Buckingham Palace. This arrives after it was said there were tensions between British royal family members.

In a May 2018 photo featuring Honorable George Brandis, the Australian High Commissioner to the U.K., meeting the Queen, it could be seen that the monarch had silver-framed snapshot of the Duke and Duchess of Sussex in one table. The photo joined two other photos of royal family members.

The said photo was reportedly taken during Meghan and Harry's 2017 engagement shoot. Raising people's eyebrows, the pic was noticeably gone among the remaining framed shots when the queen met High Commissioner for Grenada, Lakisha Grant, on October 22.

While the photo was removed, the two other photos remained on the table. One of them was a picture of Prince William and his wife Kate Middleton, with the other one featured William and Harry posing together weaing military uniforms.

In related news, conservative commentator Candace Owens didn't hold back when she lashed out at Meghan and Harry in a Twitter rant following the airing of "Harry & Meghan: An African Journey" documentary. The President Donald Trump supporter blasted the royal couple for "using African children as a backdrop to complain about your over-privileged life," calling the action "offensive."

"Invoking your own mother's tragic death to demand the press stop calling out your hypocritical wife is downright disgusting," the 38-year-old went on saying. Not stopping there, Candace also dubbed the former "Suits" star "a witch," and "Harry is under her spell." 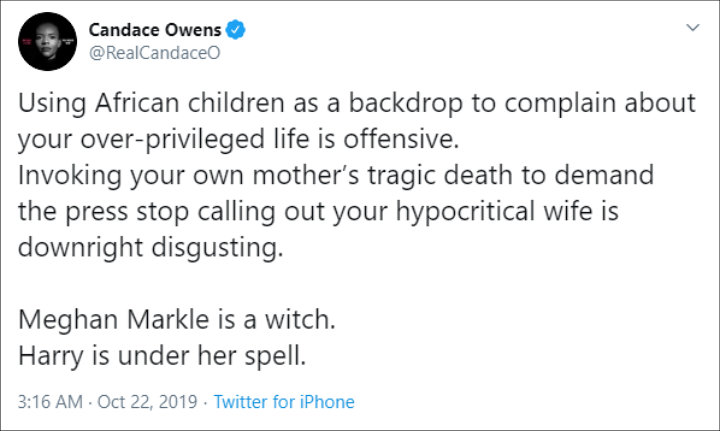 People were divided in the replies but someone took aim at Candace. Calling the activist "mean," the person wrote, "Owens laughed when 50 people were slaughtered and fought with the family of a murdered woman now she’s using the tragic death of someone’s mother against him. She's said that when she was on the left she was mean, can you imagine what she was like then!"

Cody Simpson Is Overheard Complaining About Miley Cyrus: 'It Was Kind of S***ty'