The 'Lara Croft: Tomb Raider' actress is joined by her 14-year-old daughter Zahara and 13-year-old daughter Shiloh when attending the promotional event for her new movie 'Maleficent: Mistress of Evil' in Europe.

AceShowbiz - It seems that Angelina Jolie has refused to be alone for the promotional tour of "Maleficent: Mistress of Evil". The 44-year-old actress, who was joined by her children at earlier special screenings for the movie, once again brought her kids for the premiere in Rome, Italy.

At the event held on Monday, October 7, the Academy Award-winning actress walked the black carpet along with her daughters Zahara and Shiloh. The eldest daughter of the Maleficent depicter showed her spotlight-worthy style as she rocked a green ombre gown by Versace. She wore her hair in its natural, curly hair texture and styled it in an updo.

Angie, meanwhile, donned a strapless high-shine sequin Versace gown to honor the late Versace designer and tailor, Luigi Massi. The dress was one of his favorite designs which he created before his death on April 2.

Her 13-year-old daughter Shiloh stayed true to her boyish looks in a metallic embellished bomber jacket teamed with matching trousers and Converse sneakers. At one point, she got playful while posing with her mother and sister, sticking her tongue out in front of the cameras. Jolie sweetly placed her hand on Shiloh's shoulder and held Zahara's hand. 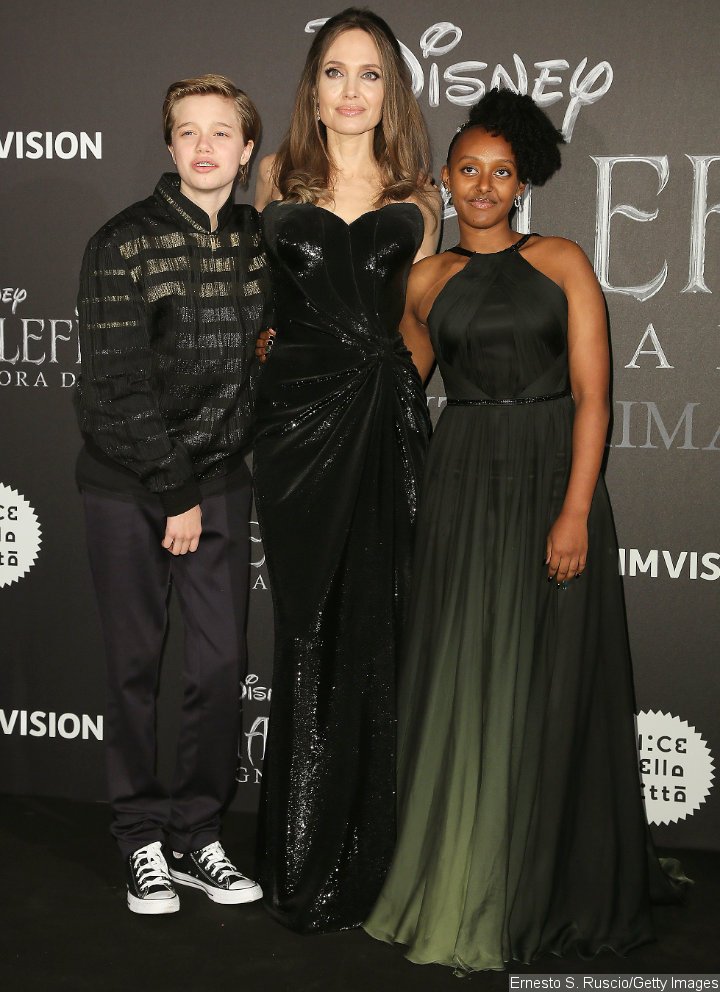 Angelina Jolie is joined by daughters Shiloh and Zahara at th Rome premiere of 'Maleficent: Mistress of Evil'.

Angie previously attended the Los Angeles premiere of the "Maleficent" sequel with five of her six kids, minus Maddox who is studying in a South Korea university. The eldest son of the "Unbroken" director later reunited with his mother and siblings at the Japan premiere of the film earlier this month.

Angie recently told Entertainment Tonight about seeing her kids growing up, "I just sent one off... I'm so proud of him. I'm so excited, I feel like my world expands as their world expands. I learn so much from them and I love this stage."

"Maleficent: Mistress of Evil" picks up several years after 2014's "Maleficent". The sequel continues to explore the complex relationship between the horned fairy and the soon to be Queen as they form new alliances and face new adversaries in their struggle to protect the moors and the magical creatures that reside within. It is scheduled to open in U.S. theaters on October 18.

Keith Flint's Personal Items to Be Auctioned to Settle Debts