The actor famed for his role as Luke Skywalker in the franchise has called Donald Trump's daughter 'fraud' after she shared a photo of her family expressing their love for the sci-fi films.

AceShowbiz - Mark Hamill controversially slammed Ivanka Trump as a "fraud" after she tweeted about her family's love of "Star Wars".

Ivanka, U.S. President Donald Trump's daughter and adviser, tweeted a photo of herself and husband Jared Kushner with their three kids, expressing their family's love of the science fiction franchise on Sunday, September 29.

"The Force is strong in my family," she captioned the image, which featured one of her kids in a Stormtrooper costume.

Mark, who is famed for playing Jedi hero Luke Skywalker in the movies, responded by quoting the tweet, and writing, "You misspelled Fraud. #GoForceYourself." 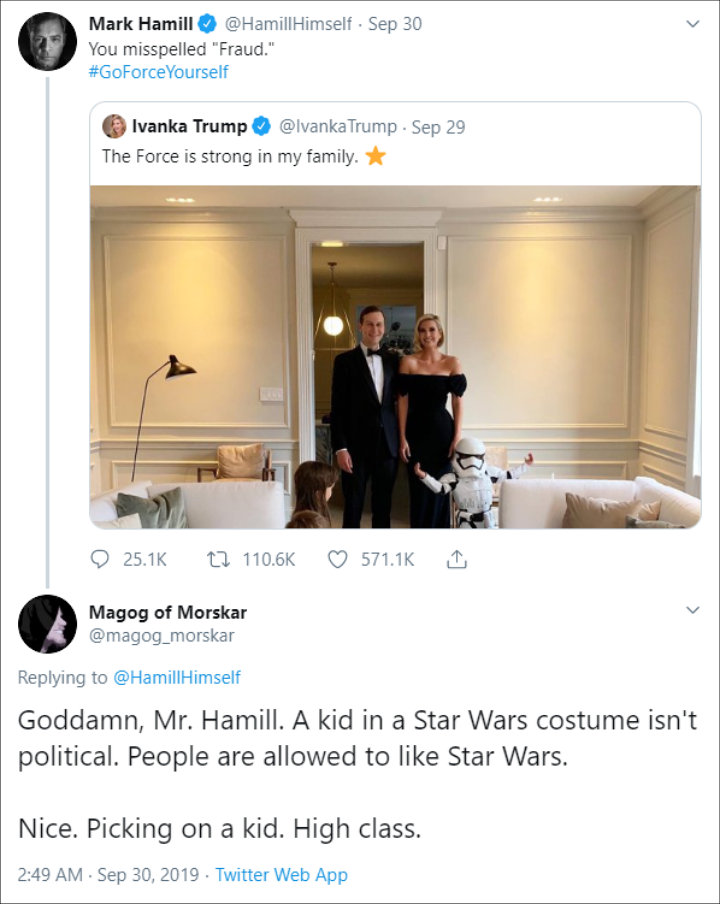 The 68-year-old actor has often criticised Ivanka's father on Twitter, and even backed a campaign to buy the social media website and ban the president from the platform.

His Twitter attack on Ivanka and her family did not go down well with some of his followers, however, with some unhappy he had taken his frustration with the Trumps out on children expressing their love for the films.

"Goddamn, Mr. Hamill. A kid in a Star Wars costume isn't political. People are allowed to like Star Wars," one angry fan wrote. "Nice. Picking on a kid. High class."

Another added, "Not cool Mark! She's just trying to have a nice Sunday with her family (thumbs down emoji) her kids are there and even dressed up!"