Confirming that she's too sick to attend Paris Fashion Week, Kylie says, 'I'm heartbroken to be missing this show, but I know that my amazing team, and my friends who are in town for the event, will help me be there in spirit.'

AceShowbiz - Earlier this week, Kylie Jenner was reported to be hospitalized with severe flu-like symptoms. While her rep has confirmed the hospitalization report and revealed that the star is doing well under doctor's care, it's still unknown what kind of illness that she's been suffering. Kylie herself has taken to her Twitter account to address her illness, admitting that she's too sick to attend a fashion show.

In the post shared on Thursday, September 26, the "Keeping Up with the Kardashians" star said that she was preparing for the launch of her makeup collaboration with Olivier Rousteing at Paris Fashion Week. However, her illness had forced her to sit out the event. "I'm heartbroken to be missing this show, but I know that my amazing team, and my friends who are in town for the event, will help me be there in spirit."

Kylie went on sending support to her collaboration and told her followers to "make sure you guys watch the show with me on Friday. It's going to [be] an epic event and I can't wait." 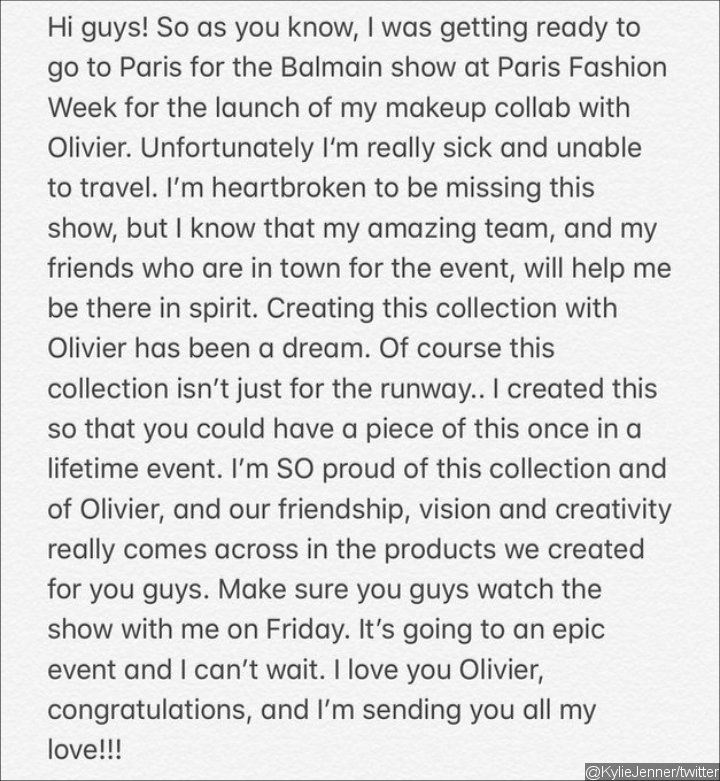 It was reported that the makeup mogul had been hospitalized with severe flu-like symptoms, including nausea and dizziness. Caitlyn Jenner has reportedly been taking care of her, while Kris Jenner went to Paris, France to represent her. HollywoodLife.com reported that the matriarch was so grateful that her ex partner could be there for their daughter.

"Kris sincerely appreciates Caitlyn stepping in and looking after Kylie while she's in the hospital. Kris has always been super protective of her children and especially her baby, Kylie. It breaks Kris' heart that she can't be right there by her side, but she knows Caitlyn is fully capable and is doing a great job looking after their daughter," a source told the gossip site, adding that Kris apparently insisted on flying back home after learning of her hospitalization. However, Kylie urged her to stay.