The 'All I Wanna Do' hitmaker draws outrage from the 'ME!' hitmaker's devoted fanbase after her use of the word 'stink' while commenting on the feud between the singer and Scooter Braun.

AceShowbiz - Sheryl Crow has backtracked on her use of the word "stink" while commenting on the controversy surrounding the ownership of Taylor Swift's masters.

The "All I Wanna Do" singer weighed in on the scandal surrounding Scooter Braun's purchase of Scott Borchetta's label Big Machine, which Sheryl is signed to, as she appeared on "Watch What Happens Live" on Wednesday night, September 11.

Asked for her opinion on Taylor's vow to re-record her first six albums after Scooter obtained ownership of her masters through the label sale, Sheryl replied, "I'm going to be honest with you… I stay out of that world. I will say one thing about masters, like I signed with a record label 30 years ago…these things, that's just the way the business goes."

"That's totally not unusual for your masters to change hands like 9,000 times. I don't know what the big stink was. I'm kind of out of the loop, so I don’t really know."

Her remarks didn't go down too well with Taylor's devoted fanbase, who quickly slammed Sheryl for her comments.

The backlash led to the 57-year-old singer taking to Twitter to stress she hadn't meant any offence with her interview, with Sheryl writing, "To those who thought I was downplaying @taylorswift13's masters changing hands, I chose the wrong word. I should have said I don't know what the situation is instead of the word stink which sounds extremely negative. I have total respect for Taylor & always wish the best for her."

"If you listen to the whole clip, I explain that I live with my head in a big hole, and don't know the details… Don't go for the clickbait. And stop pitting women against each other." 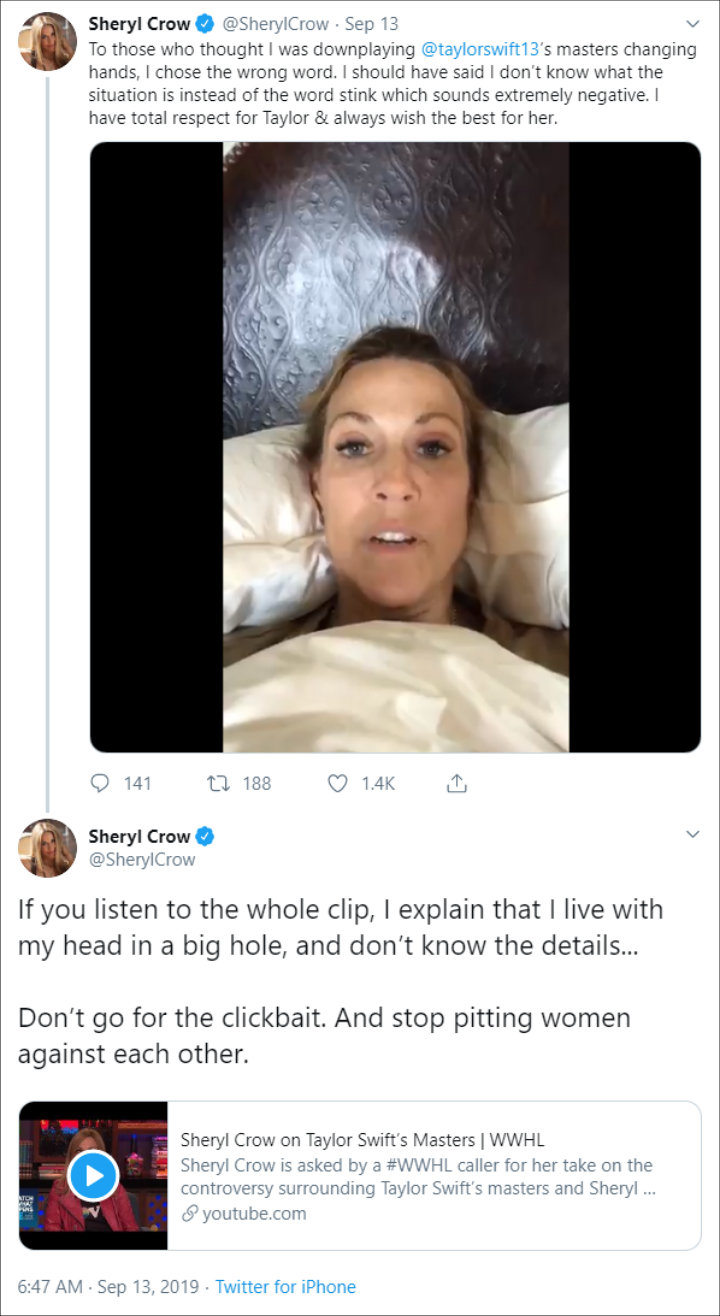 Sheryl Crow tweets a video with a caption defending herself about the Taylor Swift drama.

Sheryl's words accompanied a video clip in which she reiterated her error in using the word stink, and added she supports the "Shake It Off" singer because she "does great humanitarian work, she's outspoken politically and she's an awesome songwriter."