The estranged wife of Scottie Pippen appears to takes a jab at Kylie Jenner's former BFF as she points out that the much younger basketball player used to date Kim Kardashian's sister Kendall Jenner.

AceShowbiz - Larsa Pippen a.k.a. Larsa Younan is not going to follow Jordyn Woods' route by flirting with someone involved or used to be involved with her best friends' sister. The estranged wife of Scottie Pippen threw a subtle jab at Kylie Jenner's former BFF as she denied reports that she hooked up with Kendall Jenner's former flame Ben Simmons.

The former star of "The Real Housewives of Miami" took to Instagram Stories to respond to the rumors linking her up to the much younger basketball player. "I never even saw him, let alone left with him," she wrote on a screengrab of the false report.

Pointing out that Ben used to date Kim Kardashian's sister Kendall, she added, "He dated my bff's sister and I would never." While the socialite didn't mention Jordyn's name, it's pretty obvious that she meant she would never betray the Kardashian-Jenner sisters by dating one of their exes. 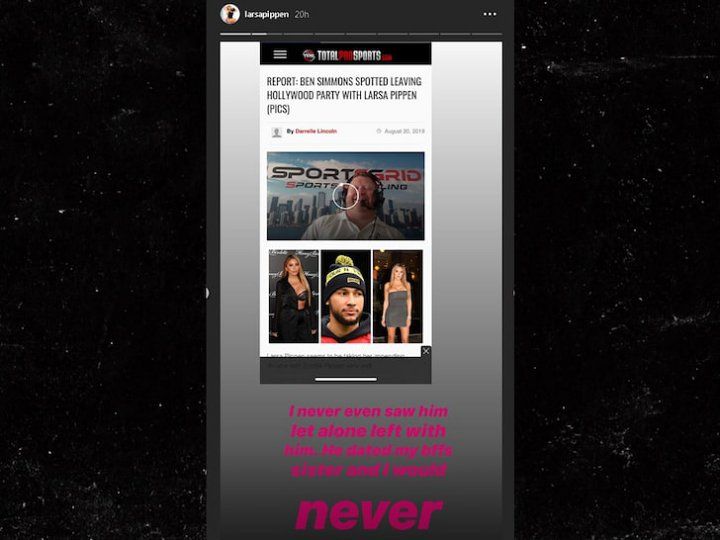 Larsa Pippen denies reports that she hooked up with Ben Simmons.

Larsa was rumored getting cozy with Ben after the two attended SKAM Artists founder Sujit Kundu's 21st birthday bash at a Hollywood nightclub on Monday night, August 19. While there were no pictures of them together, an eyewitness told MTO News that Ben and Larsa looked like a couple at the club. The two reportedly spent most of the night talking with each other despite the presence of tons of other celebrities, including Ashanti and Tara Reid, at the party.

And when they're leaving the club, they allegedly made their way out within minutes of each other. In a picture obtained by the site, 23-year-old Ben walked out alone and was escorted via the adjacent Tao Restaurant surrounded by security. Larsa reportedly left just moments later, though it's unclear if they left together.

Larsa married Scottie in 1997 and have four children together, Scotty Pippen Jr., Preston Pippen, Justin Pippen and Sophia Pippen. Larsa filed for divorce from the former Chicago Bulls player for the first time in 2016 after police were called to their house twice in three weeks prior to their split announcement for domestic disturbances.

One year after that, however, the then-couple called off their divorce and rekindled their relationship. Larsa filed for divorce again in November 2018, listing October 29 as the date of separation and citing irreconcilable differences as the reason of the split.

As for Ben, he dated Kendall for a year before they broke up sometime around May.