During an interview with Zane Lowe on Apple Music's Beats 1 radio, the Bon Iver frontman shares his thought on the public criticism he made at the 'My Name Is' rapper's track 'Fall'.

AceShowbiz - Bon Iver star Justin Vernon regrets being so public in his criticism of a controversial Eminem track he featured on.

Vernon appeared on a new song by the "My Name Is" rapper called "Fall" last August (18), which was released on the same day as his Big Red Machine album.

At the time the "Hey, Ma" singer tweeted his criticism of the track, in which Eminem used a homophobic slur to call out Tyler, the Creator. But in a new interview on Tuesday (August 20) with Zane Lowe on Apple Music's Beats 1 radio, Vernon was regretful about his tweets about the song.

"I made that huge mess out of the Eminem song," he sighed. "I was just in a car wash, and I just tweeted. It's like, what was I doing? I should've just probably chilled out and actually just said, 'Please don't put this song out.' "

When Lowe suggested he could have kept it private, he replied, "Exactly. And it was really rude, and I felt really bad about it."

During his tweet storm, the singer claimed he was never in the studio with Eminem during the song's creation and had asked the "Stan" rapper to change the track.

"Was not in the studio for the Eminem track," he wrote at the time. "Not a fan of the message, it's tired. Asked them to change the track, wouldn't do it... It is certainly not the time for slurs. Wish they would have listened when we asked them to change it." 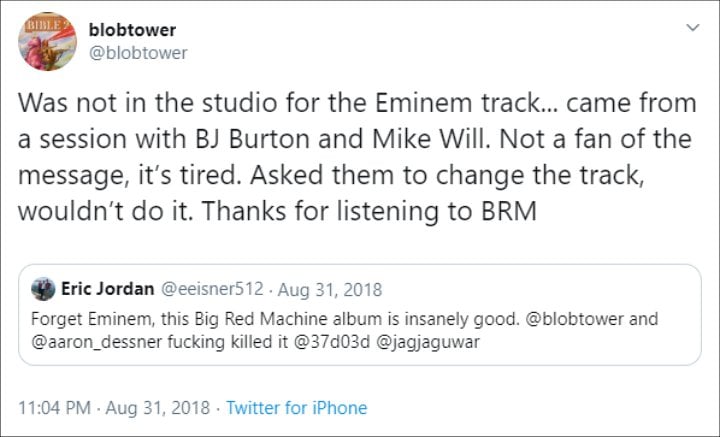 Bon Iver criticized Eminem for the slurs he used on 'My Name Is'.

The singer thought it wasn't time to criticize the youth.

The gay slur comes during the 10th track on Eminem's surprise album, as the MC takes aim at fellow rapper Tyler, spitting, "Tyler create nothin', I see why you called yourself a f****t, b***h."

John Mayer Promises New Album Is Worth the Wait

Little Mix Earning $11 Million From Their Tour Profits in 2020

St. Vincent Grateful to Make Music for Living: 'I'd Be Dead Without Music'