The drama between the 'Bartier Cardi' rapper and the 'Anaconda' hitmaker is brewing again following the latter's subtle shade at her nemesis in the latest episode of 'Queen Radio'.

AceShowbiz - Cardi B and Nicki Minaj's relationship is anything but cordial in the last year. Recently, the tension between the two hip-hop stars rose again following the latter's subtle shade at her nemesis in the latest episode of "Queen Radio".

Apparently noticing this, Cardi is believed to have hit back at the Harajuku Barbie by posting a clip of Mariah Carey's hit song "Obsessed" and writing in the caption, "Have you ever had somebody sooo obsessed with you." She added, "S**t starts to feel a little creepy."

Many people believe the Bronx femcee accused Nicki of being "obsessed" with her. But the Barbs, Nicki's fans, soon claimed that it might be Cardi who is obsessed with Nicki after they stumbled upon old footage of the "Bodak Yellow" hitmaker peeping photos of the "Starships" raptress.

"Says the one that was stalking nickis page," wrote Nicki's fan who accused Cardi of stalking Nicki on social media. Another blasted the mother of one, "Girl you're nobody to be obsessed with you'll never be Nic or her level."

"You're so bothered and it's sad. You wanna be so unbothered yet you breath the minute somebody mention you with the truth," one hit back at Cardi, while someone else commented, "Well damn somebody gotta do it cuz offset sure ain't."

While it's not clear if it's coincidental or not, Nicki then changed her Twitter profile picture to the one that Cardi peeped at, though it's an old photo.

Nicki earlier reignited her feud with Cardi by saying on her "Queen Radio" show, "I still had to go through these things because of people like you who made a sport out of tearing down a young, black woman who's done nothing but come in this game with an authentic come-up, writing raps, and doing what the f***in' was really necessary. No Instagram, no reality shows, no sucking DJs' d**ks."

While she didn't mention a name, many believed the last line was aimed at her nemesis Cardi. She then added, "I would feel so f***ing crazy if I had No. 1s and Grammys and ain't on nobody's top 50 list." Cardi has multiple No. 1 singles, a No. 1 album, and secured a 2019 Grammy for Best Rap Album ("Invasion of Privacy"), but she wasn't listed in Ebro Darden's list of the top 50 rappers of all time. Nicki was ranked 33rd in the list, coming in between Cam'ron and Lil Wayne.

Cardi's fans quickly came to her defense, with one writing, "Nicki Minaj is still shading Cardi B but she's up here talking about being bullied for 12 years." Another blasted Nicki for attacking Cardi out of nowhere, "She doesn't get anything that everyone else doesn't get. Cardi complains, yes but she doesn't play victim. She says what she says and keeps it moving. Miss nicki, she throws stones, subliminal, then plays victim & has amnesia about why ppl attack her. Nah." 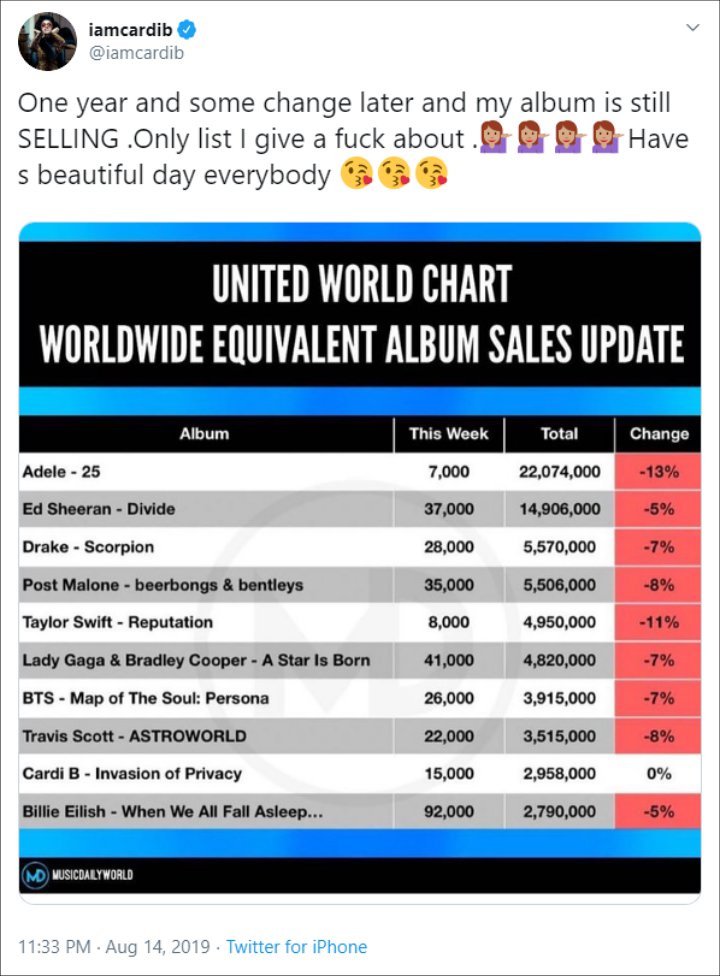 Cardi B responds to Nicki Minaj's shade on 'Queen Radio'.

Cardi then clapped back by posting a list of the world's top-performing albums, which include her set "Invasion of Privacy". "Only list I give a f**k about," she wrote in the caption.

Nicki Minaj Breaks Silence on Father's Death: It's 'the Most Devastating Loss of My Life'