The 'Chrisley Knows Best' stars are indicted on 12 charges of conspiracy, bank fraud, wire fraud and tax evasion after denying the claims and maintaining they 'have nothing to hide and have done nothing to be ashamed of.'

AceShowbiz - Reality TV stars Todd Chrisley and Julie Chrisley were officially indicted on Tuesday, August 13 by a grand jury on tax evasion charges by the Northern District of Charges. The couple was indicted on 12 counts, which also allege them of conspiracy, bank fraud and wire fraud among other offenses.

Their accountant Peter Tarantino has also been charged with tax-related offenses. U.S. Attorney Byung J. "BJay" Pak says in the press release issued by the Northern District of Georgia's Department of Justice, "Todd and Julie Chrisley are charged not only with defrauding a number of banks by fraudulently obtaining millions of dollars in loans, but also with allegedly cheating taxpayers by actively evading paying federal taxes on the money they earned."

The stars of "Chrisley Knows Best" are facing a number of accusations that trace to "at least as early as" 2007. They allegedly provided "false information" to banks to obtain "millions of dollars" in loans roughly between 2007 and 2012 and "fabricated bank statements and a fabricated credit report" to obtain a lease for a California home in 2014 evaded paying federal taxes. The allegedly also didn't file income tax returns in a "timely" manner between 2013 and 2016, and obstructed "IRS collection efforts."

Prior to the indictment, Todd released a lengthy statement on Instagram denying all the claims against him and his wife. The real estate mogul claimed that an ex-employee had stolen from his family, created "phony documents" and forged signatures years ago, which led to the investigation by the U.S. Attorney's Office.

"I've never talked about this publicly before, but there's been a cloud hanging over Julie and me and our entire family for the past seven years. It all started back in 2012, when we discovered that a trusted employee of ours had been stealing from us big time," Todd said in the post. The 50-year-old accused the ex-employee of "creating phony documents, forging our signatures, and threatening other employees with violence if they said anything."

"We even discovered that he illegally bugged our home," he added of the unnamed ex-employee. "Needless to say, we fired the guy and took him to court - and that's when the real trouble started. To get revenge, he took a bunch of his phony documents to the U.S. Attorney's office and told them we had committed all kinds of financial crimes, like tax evasion and bank fraud. That got their attention all right, but once we had a chance to explain who he was and what he'd done to us, they realized it was all a bunch of nonsense and they sent him on his way."

But the "former employee didn't give up," Todd continued. "Somehow, he persuaded a different set of investigators at the U.S. Attorney's office not only to reopen the case but also to grant him immunity from prosecution for his own crimes and bring charges against us." 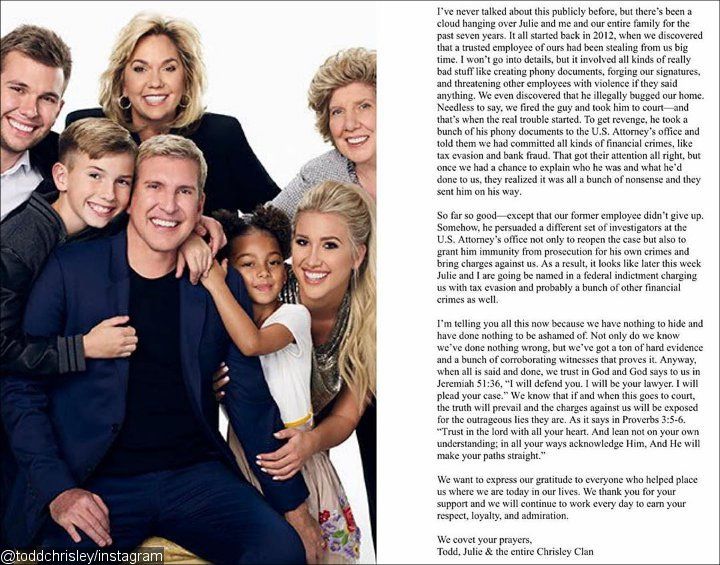 Amid the case, it's reported that USA Network canceled "Chrisley Knows Best". However, a source tells HollywoodLife.com that the network has not made such decision and that the second half of the show's season 7 is expected to premiere this fall.

Todd Chrisley Fires Back at Fan Criticizing His Biracial Granddaughter