Through their management, the K-pop boyband reveals that Lotte Duty Free Family concert will be their last scheduled performance before the members take a break in their own personal ways.

The Korean boy band's management officials have issued a statement alerting fans to an upcoming hiatus, and asking them to let the pop idols rest up in peace, so they can all return "refreshed and recharged".

"We would like to announce that for the first time since their debut, BTS will be going on an official and extended period of rest and relaxation," it reads. "Today's (Sunday) LOTTE DUTY FREE FAMILY CONCERT performance will make the last scheduled event before members prepare to take their vacations."

"This period of rest will be an opportunity for the members of BTS, who have relentlessly driven themselves towards their goal since their debut, to recharge and prepare to present themselves anew as musicians and creators. This will also provide them with a chance to enjoy the ordinary lives of young people in their 20s, albeit briefly."

"During this time, the members will rest and recharge in their own personal ways. Should you have a chance encounter with a member of BTS while they are on vacation, we ask that you show consideration for their need to rest and enjoy their private time off. BTS will return refreshed and recharged to return all the love you have and continue to show them." 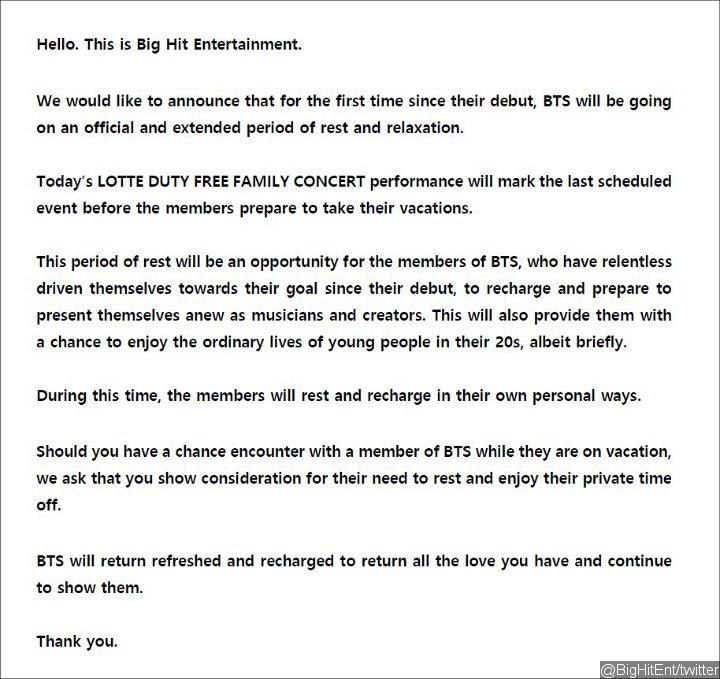 The news comes just two days after "Boy with Luv" singer V released his solo track "Winter Bear", suggesting he'll be taking the time off to focus on new music.

'The Hunt' Release Gets Scrapped in the Wake of Mass Shootings

Kelly Rowland: Destiny's Child Reunion Tour Was News to Me

BTS Gets Apology From Topps for Their Bruised Trading Card