Shortly before announcing the plan, the 'Talk' hitmaker tells fans that he is in shock to hear and see 'an act of terrorism' taking place 'so close to home, his family and his friends.'

AceShowbiz - Khalid has announced plans to host a benefit concert for victims of the shooting massacre in El Paso, Texas over the weekend (August 03).

A gunman killed 22 people and injured dozens at a Walmart store in the city on Saturday morning and the "Talk" hitmaker, who lived in the border town during his senior year in high school, will make a contribution to the recovery effort by offering up proceeds from an upcoming show.

"Over the past few days, I've been thinking of ways to help out and support the city," he wrote on Twitter on Monday (August 05). "I'm planning for a benefit concert later this month, all of the proceeds will go to the families affected by the shooting. Sending everyone my love and will keep you guys updated." 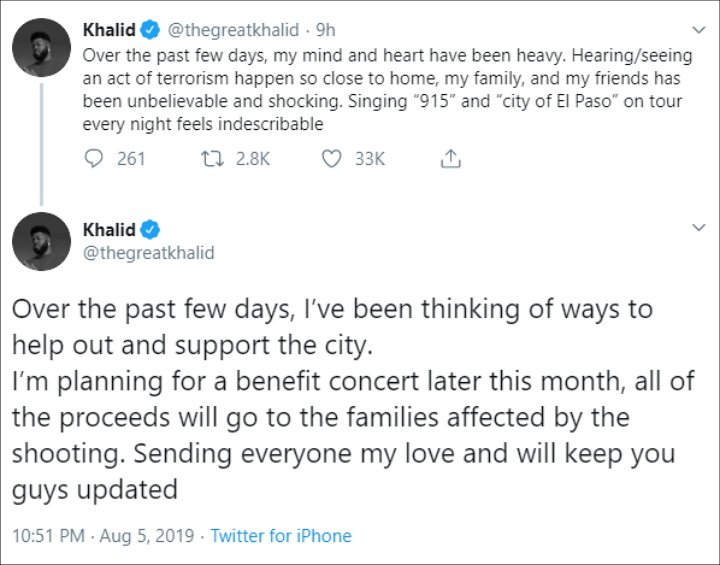 Khalid announced the upcoming benefit concert, which is set to take place later this month.

Khalid confessed he has been left deeply shaken thinking of what could have happened if his loved ones from El Paso were shopping at Walmart on the day of the mass shooting.

"Over the past few days, my mind and heart have been heavy," he shared. "Hearing/seeing an act of terrorism happen so close to home, my family, and my friends has been unbelievable and shocking."