The MAGA supporter, who criticized a World Hijab Day awareness event, takes to Twitter to defend herself after the Miss World America official removes her title over her 'offensive' tweets.

AceShowbiz - Donald Trump supporter Kathy Zhu has been stripped off her title as 2019 Miss Michigan after her old tweets, which are deemed "racist," surface. It's the beauty pageant contestant herself who brought to light the removal of her position, tweeting on Thursday, July 18, "Miss World America's State/National/Chief Director accused me of being racist, Islamaphobic, and insensitive. They stripped me of my Miss Michigan title due to my refusal to try on a hijab in 2018, my tweet about black on black gun violence, and 'insensitive' statistical tweets."

Along with the tweet, Kathy shared an email she received from the organization announcing the decision to remove her title. In the email, state director of the Miss World America beauty pageant for Michigan, Laurie DeJack, told her that she must dissociate herself from the contest due to "offensive, insensitive and inappropriate content" found on her social media. 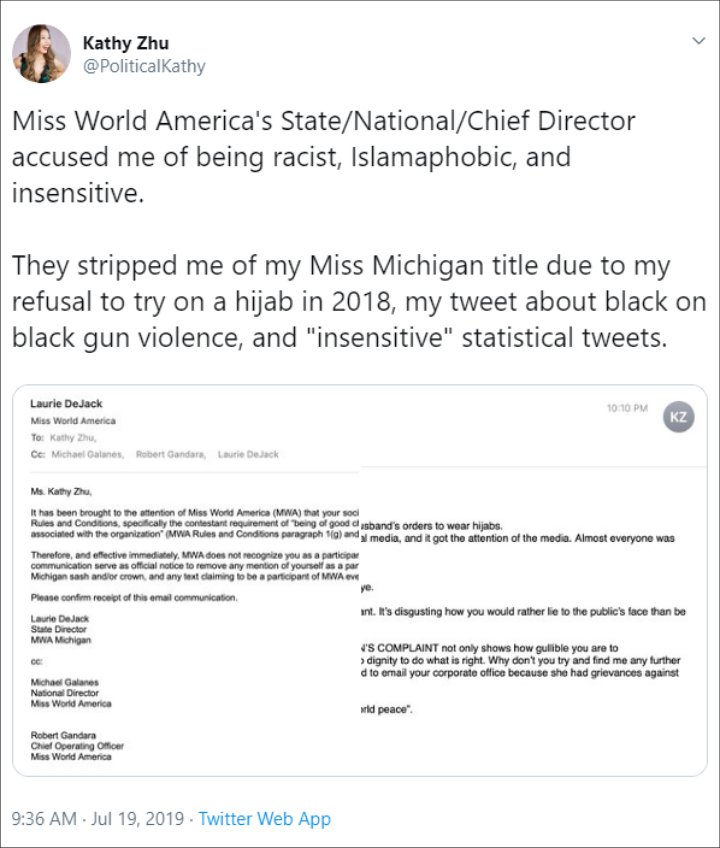 Kathy also shared screenshots of her text-message exchange with Laurie, who notified her about a "huge issue" with her without providing any details. After pressed by the 20-year-old for more information, Laurie cited an old tweet by Kathy that became issue for the organization. Kathy's now-deleted tweet read, "Did you know the majority of black deaths are caused by other blacks? Fix problems within your own community first before blaming others."

In another tweet posted in February 2018 which she has since deleted, Kathy criticized a World Hijab Day awareness event at the University of Central Florida, where she had been a student before transferring. "There's a 'try a hijab on' booth at my college campus," she wrote at the time. "So you're telling me that it's now just a fashion accessory and not a religious thing? Or are you just trying to get women used to being oppressed under Islam."

In an interview on Saturday, Kathy said her tweets had been taken out of context and claimed that she was punished for her conservative views. She also said that not wanting to wear a hijab did not make her an Islamophobe. "They just immediately assumed that I was a racist," she said. "They should have let me explain myself."

She also defended herself in a video posted on Twitter on Friday, saying the organization discriminated her because of her "different opinions." She said in the video, "I am glad this story came to light because this is more than just some beauty pageant, this is about the prejudice views against people with 'different opinions.' "

Kathy is vice president of the College Republicans at the University of Michigan. She will no longer represent Michigan in the Miss World America pageant in October in Las Vegas. There's no word yet on who will replace Kathy in the competition.

Halle Berry Spotted on Rare Outing With Her Two Children