The 'Dumb, Dumb, Dumb' singer tweets her apology for backing out of the California State Fair in Sacramento, and her bandmate T-Boz adds that the 48-year-old needs to heal.

AceShowbiz - TLC have been forced to cancel two concert dates after singer Chilli was put on vocal rest by doctors.

The 48-year-old musician, real name Rozonda Thomas, had been due to take to the stage alongside her bandmate T-Boz (Tionne Watkins) at the California State Fair in Sacramento on Sunday night (July 14). But prior to the performance, Chilli tweeted her apologies to fans, admitting she's lost her voice.

"It breaks my heart to tell our fans that we have to cancel our performance tonight at Sacramento because I lost my voice and my dr has me on strict voice rest," she tweeted.

T-Boz added her apologies as well, tweeting, "Yes it breaks my heart too... And #Sacramento We'll Come There Again -- I'm sure at some point... We love you all and thank u for all your support...but we need her to heal." 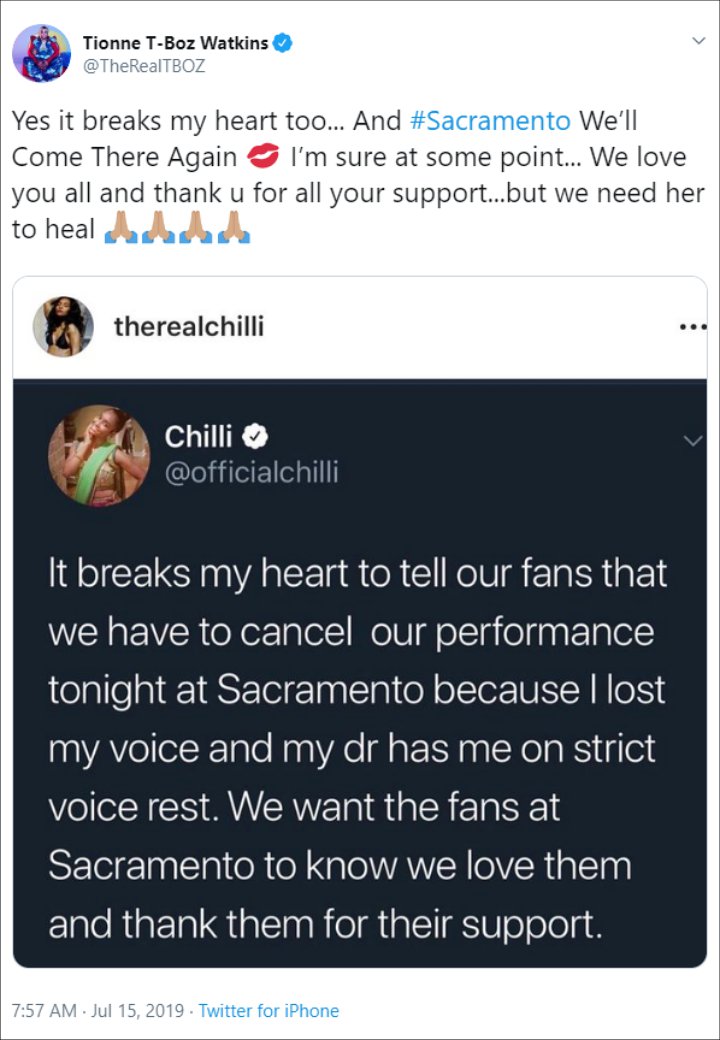 TLC were replaced by Eric EQ Young at the California State Fair, and En Vogue will step in to fill their slot at the Stanislaus State Fair on Tuesday night (July 16).

"We are very disappointed TLC cancelled, especially because the community was extremely excited for the show," Stanislaus State Fair marketing and communications director Adrenna Alkhas said in a statement. "We know this is always a possibility in our line of business. We are still very excited to have En Vogue replacing them. We wish Chilli from TLC a fast recovery from losing her voice."

TLC are next scheduled to perform when they join Nelly and Flo Rida for their upcoming co-headlining summer tour, which will begin on July 23 in Tuscaloosa, Alabama.

TLC Forced to Reschedule Shows Due to T-Boz's Illness