The 20-year-old rapper, who has been open about his drug addiction issue on his songs, declares on Twitter that he will stop taking codeine for good after making his girlfriend worry about him a lot.

AceShowbiz - Juice WRLD has been open about his struggle with drug addiction, but now he has promised to lead a sober life. The Chicago-born rapper took to Twitter on Tuesday, July 9 to publicly declare that he will stop taking codeine for good.

The "All Girls Are the Same" hitmaker initially hinted at his intention to stay away from drugs with a cryptic post. "Ima leave that s**t alone 4 good watch me.. I'm done w it," he wrote. His girlfriend Ally Lotti replied to his post, "pls."

It seems that Juice's decision to ditch his drug addiction was fueled by his love to his girlfriend, who was apparently worried about him a lot because of his drug habit. Making his intention clear, the 20-year-old singer/songwriter posted a longer tweet which read, "Bae I'm sorry I be tweaking, you've put up with more than ppl know I know I be scaring you, fuck Codeine I'm done. I love you and im letting it be known publicly that ain't s**t f***ing up the real love I found."

Juice went on using his platform to spread awareness about the danger of using drugs. "Learn from this everyone. Addiction kills all but you can overcome," he concluded his post. 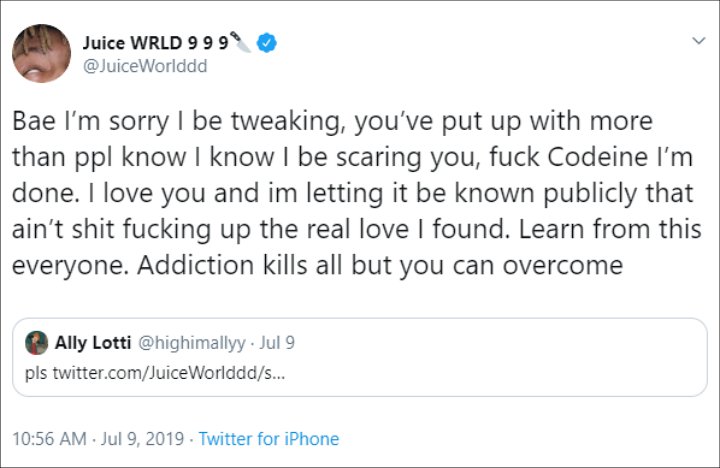 Juice WRLD makes his intention clear that he will stop using drugs.

Juice has touched on his substance abuse issue on his songs. On "I'll Be Fine," he raps "Swervo told me stop popping them xannies before I flat line... My momma told me, 'Stop the painkillers'/ Them s**ts is killing me."

Last year, he revealed that he started taking drugs because of Future's music, prompting the "Turn On the Lights" rapper to apologize to Juice. "That's the first thing I told him. He just was like, 'Wow.' He kind of apologized," Juice said about Future's reaction upon learning of the influence of his music on the younger rapper.

"I don't want to tell nobody I stopped drinking lean," Future later told Genius. "I didn't want to tell them because I felt like then they was going to be like 'oh, his music changed because he ain't drinking lean no more.' Or, 'I can hear it when he changing.' And people be like 'Damn, why don't you even say it?' But it's hard when your fans are used to you being a certain type of way."

In October 2018, however, Juice admitted that he tried to adopt a more sober lifestyle. "I try not to let it affect me too much. It doesn't really have that big of an impact on me," he told Vulture. "More recently, I've just kind of realized certain things about myself and my coming up, the way that substances played a part in my life, whether it was me doing them or other people. It's something that I'm trying to separate myself from."