BBC Radio 1 DJ Edith Bowman has sparked speculations that the 'A Star Is Born' co-stars might make a surprise appearance at the music festival when appearing on talk show 'Sunday Brunch'.

AceShowbiz - Bradley Cooper could be set to make his Glastonbury festival debut - and Lady GaGa may make a surprise appearance too.

The pair starred together in the 2018 box office smash "A Star Is Born", as singer-songwriter Ally and her mentor Jackson Maine, and topped charts worldwide with the international hit "Shallow". And with the 44-year-old's character's backing band, Lukas Nelson & Promise of the Real, set to play the Park Stage at the Worthy Farm event on Friday, June 28, the duo are rumoured to be heading to the stage for a one-off performance.

Speaking during an appearance on U.K. TV show "Sunday Brunch" over the weekend, BBC Radio 1 DJ Edith Bowman hinted the reunion may be on the cards.

"On my podcast, I had Bradley Cooper talking about 'A Star Is Born', and when I spoke to him I was like, 'I just want to see you guys do a gig, you know play it live'," she shared.

When pushed to reveal more by presenters Tim Lovejoy and Simon Rimmer, Bowman continued: "He was like, 'Well we have been talking to (Glastonbury organisers) Nick Dewey and Emily Eavis about it, we'd do the Park Stage'. And I said, 'That would be amazing'."

Emily later denied the rumours on Twitter, writing "the answer is no, that isn't happening" - but that hasn't stopped fans enthusing over the possibility of a surprise appearance from the duo. 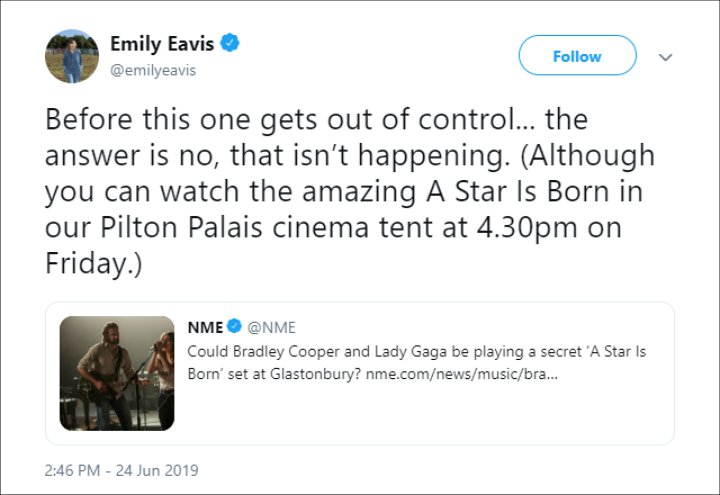 Bradley and Gaga have been the subject of romance rumours since "A Star Is Born" was released, with the speculation further fuelled by the actor's split from Irina Shayk, the mother of his daughter Lea, earlier this month.

Meanwhile, Gaga, 33, who split from fiance Christian Carino in February, was heckled by fans calling "Where's Bradley?" during a recent gig, and hit back by telling the crowd: "Be kind or f**k off."

The 2019 Glastonbury Festival will take place at Worthy Farm in Somerset, England from 26 to 30 June.