The shade comes as a surprise since Tip and Ri used to be friends and even collaborated for a song titled 'Live Your Life' off the rapper's sixth studio album 'Paper Trail'.

AceShowbiz - Rihanna is now happily dating Arab billionaire Hassan Jameel, and fans can't be happier for the "Diamonds" hitmaker. However, one particular person apparently does not approve of the singer's decision to date an Arab man instead of a black person.

Rapper T.I. recently made a comment about the Barbadian singer's love life decision which people deemed salty. In a screenshot obtained by MTO News, a fan tweeted, "Does RIhanna get slandered for not dating a black person or does that only happen to black dudes?" while another user responded by saying that it's "upgrading."

Another fan wrote in an Instagram comment, "Well, she didn't drag black men in the process." The post gained 24 replies and one of them was made by Tip. The "Ant-Man and the Wasp" actor wrote, "how do you know?" 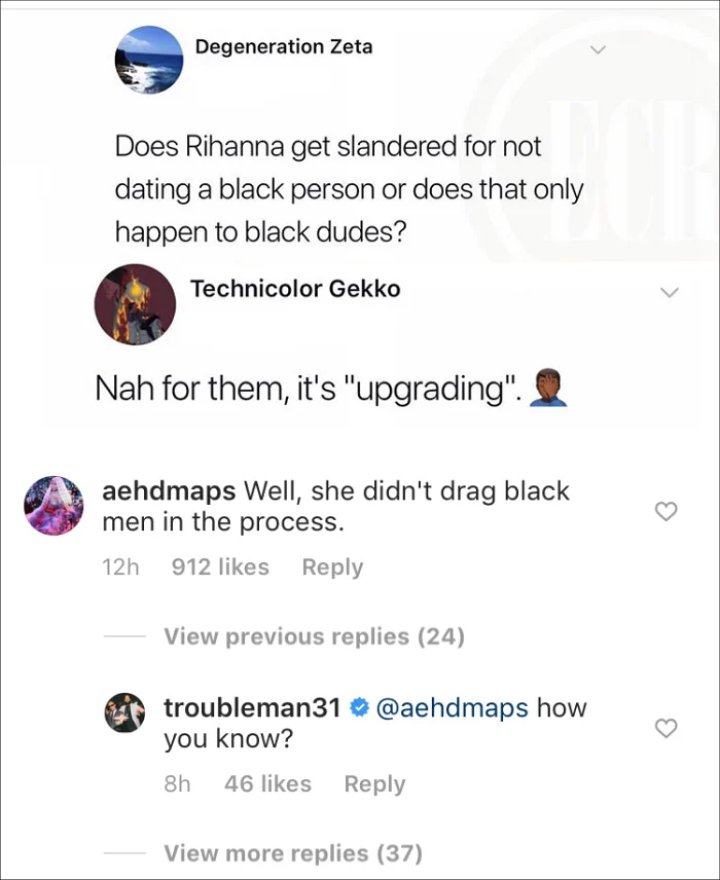 T.I. appeared to shade Rihanna for dating a non-black man.

It comes as a surprise since Tip and Ri used to be friends. They even collaborated for a song titled "Live Your Life" off the rapper's sixth studio album "Paper Trail" in 2008. The song was about T.I.'s rise to fame and optimism of the future. It also talked about the American troops fighting in Iraq and Afghanistan.

While Rihanna has yet to comment on T.I.'s shade, previous report suggested that the "Umbrella" singer could see herself having babies with Hassan, whose family owns the Abdul Latif Jameel Co. "Rihanna would love to have babies with Hassan," said a source previously. "Rihanna finally thinks that she has got it right when it comes to having a relationship and having it actually work and for there to be be a future with it."

However, the source noted that the singer was not in a huge rush. "There's no timeline, she's not stressing about it," explained the insider. Despite saying that the "Ocean's 8" actress is not in rush to have a baby with Hassan, the insider assured that "she's in love with him," adding, "if Hassan wanted to start tomorrow she would find it easy to be convinced to go that route with her life."