While the 'Edge of Tomorrow' actor has yet to respond to the 'Despacito' hitmaker's challenge, former UFC Champ Conor McGregor comments on Justin's trolling-like challenge.

"I wanna challenge Tom Cruise to a fight in the octagon," the Canadian superstar wrote in the bizarre tweet. "Tom if you don't take this fight your [sic] scared and you will never live it down."

The "Love Yourself" crooner then mentioned UFC honcho Dana White to help him make the fight against the 56-year-old "Mission Impossible" star happen. "Who is willing to put on the fight? @danawhite ?" he concluded.

Justin Bieber took to Twitter to challenge Tom Cruise to a fight.

Fans understandably were confused as to what drove Justin to challenge the actor all of sudden. "We don't like your odds, Justin..," one fan replied to the tweet, while another user simply asked, "Literally, what?"

"I got $100 dollar investment on the fight," another fan quipped. One person, meanwhile, joked about Tom's relation to Scientology, writing to the Biebz, "if u lose u gotta become a Scientologist tho."

One comment also suggested that despite his age, Tom most likely would beat Justin easily should he accept Justin's challenge. "Not only is Tom Cruise an unbeatable machine of strength and speed, he's also insane and completely undeterred by the fear of death. Good luck, Justin," one user wrote. "tom cruise does his own stunts and risks his life what's this boy gon do," another one echoed the sentiment.

While neither the "Edge of Tomorrow" actor and White has yet to respond to Justin's challenge, former UFC Champ Conor McGregor commented on Justin's trolling-like challenge. 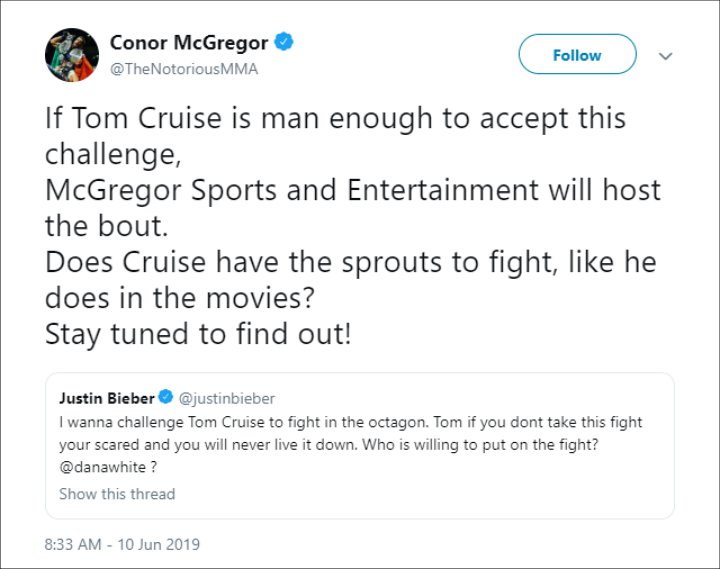 "If Tom Cruise is man enough to accept this challenge, McGregor Sports and Entertainment will host the bout," he wrote on the micro-blogging site. "Does Cruise have the sprouts to fight, like he does in the movies? Stay tuned to find out!"

Artist of the Week: Madonna