January Jones Gets Called Out for 'Insensitive' Comment Over Anxiety Meme

The meme eliciting response from the former 'Mad Men' star was shared by MyTherapistSays and sees a photo of Ross Geller with a subtitle of a popular quote from 'Friends'.

AceShowbiz - January Jones has been criticised by fans for comments she made in response to a meme about anxiety.

The backlash came following a remark made by the actress on a post shared by MyTherapistSays on Instagram.

A meme uploaded to the account on Sunday, June 02 read, "Me scrolling through Instagram finding memes relating to my irrational fears and anxiety."

Alongside the words was a photo of "Friends" character Ross Geller, with a subtitle of a popular quote from the show, which said, "Ah, humour based on my pain. Ah, ha, ha."

Taking to the comments section of the post, the "Mad Men" star wrote, "What is everyone nervous about? We all die. Find love or don't. Have fun or don't. Eat food and then get rid of it. It's easy." 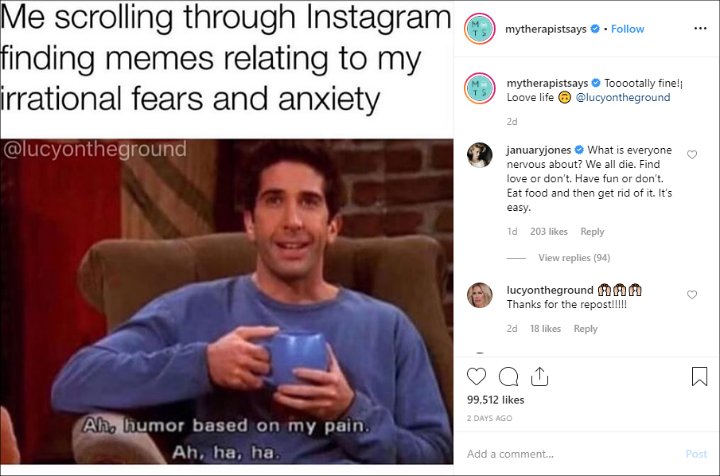 Fans were quick to react negatively to the 41-year-old's comments, and slammed her words as being "harmful" and "disappointing".

"You can't possibly be that ignorant, can you? Are you high? I actually had to check to see if that was really you or not," wrote one user, while another commented, "WoW. The insensitivity. do you have any idea what it’s like? Anxiety and Depression... It is an everyday battle."

"I've never felt the need to reply to a celebrity, but this is one of the most uneducated comments I have seen. With your platform, you can do better," urged another user.

January has yet to respond to the backlash.