Upon learning that Thelma Smith has been told to vacate her Ladera Heights, California home by June 30, the former California governor turns to social media to announce his support.

AceShowbiz - Arnold Schwarzenegger has stepped in to help a 102-year-old friend who has been threatened with eviction.

The former California Governor was appalled to learn Thelma Smith is being forced out of the Ladera Heights, California pad she has called home for over three decades, so her landlord can reportedly move his daughter

As officials at the Los Angeles County Department of Consumer and Business Affairs investigate the case, Schwarzenegger has pledged his support, tweeting: "Thelma has been a dear friend for a long time. Imagine doing this to a 102-year-old woman who gave back to the community her whole life. It is heartless. Thelma, I'll be reaching out to help. Landlords, you'll hear from me too." 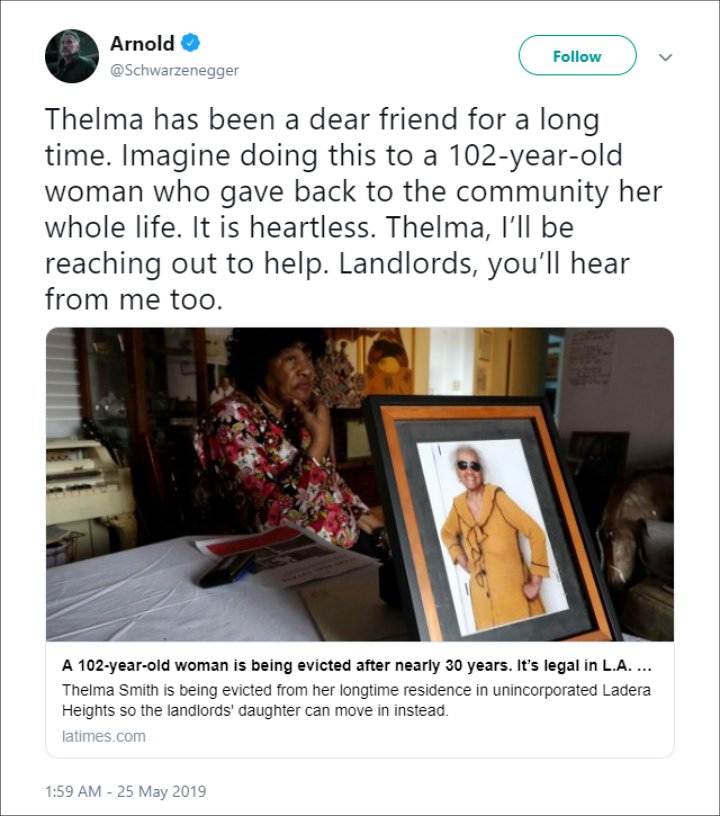 Arnold Schwarzenegger promised to help Thelma Smith, who is being forced to vacate her Ladera Heights, California home.

He has also posted a link to the Los Angeles Times article about Thelma's eviction.

Smith was given notice on March 8 and currently must vacate her home by June 30.

'The Biggest Loser' Contestant Daniel Wright Loses His Battle to Leukemia, Dies at 30

Arnold Schwarzenegger Thanks Firefighters for Home Evacuation Amid Getty Fire

Arnold Schwarzenegger Teases Sylvester Stallone Over the Size of His 'Knife'