More than two months after undergoing open-heart surgery, the former Fleetwood Mac guitarist accompanies his daughter Leelee as she and her classmates perform 'Landslide'.

He played guitar as Leelee and her classmates sang the Fleetwood Mac classic "Landslide", and his wife, Kristen, shared video of the performance on social media early on Saturday.

"Last night was epic," she wrote, and later added, "First time I've seen Lindsey play in the last 4 mos (months), all the while Leelee ending her high school career. AND she sings a little 'Landslide' with her dad. I cried, I'll admit it. Never know what’s ahead so enjoy the moment." 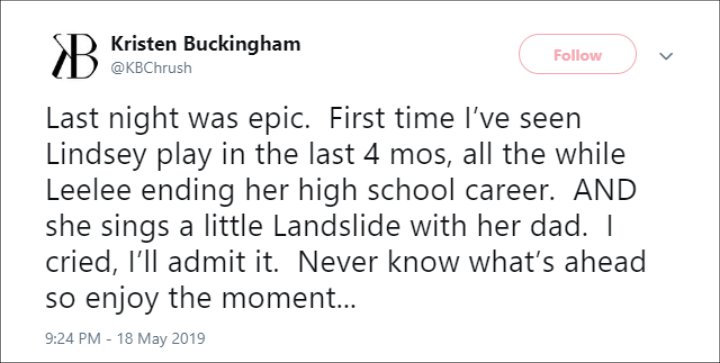 Kristen Buckingham raved about the epic night on Twitter.

Buckingham underwent open-heart surgery earlier this year and his wife broke the news on Facebook in February, revealing surgery had left her husband with "vocal-cord damage."

She added, "While it is is unclear if this damage is permanent, we are hopeful it is not."

There has been no update on the condition of Buckingham's vocals.

Khloe Kardashian on Possibility of Getting Married Again: Life Is About Love