Having played the Duchess of Sussex's onscreen husband on 'Suits', the actor husband of Troian Bellisario tweets a sweet congratulatory message for her and her husband, Prince Harry.

AceShowbiz - Patrick J. Adams is getting his request in quickly for a playdate with his former "Suits" co-star Meghan Markle, Duchess of Sussex's new royal baby.

Meghan gave birth to a boy, her first child with husband Prince Harry, on Monday, May 06.

Prior to becoming a royal, Meghan starred in U.S. TV show "Suits" as Rachel Zane, opposite Patrick as her on-screen husband Mike Ross, and the actor was quick to offer his congratulations after learning of the happy news.

"Just heard that the world just got heavier by 7 pounds and 3 ounces. Much love to him and his incredible parents," Patrick, who became a first-time father himself when wife Troian Bellisario gave birth to a daughter last October, wrote. "Learned first hand 7 months ago how transformational becoming a parent is and couldn't be happier for Meghan and Harry as they begin this adventure. #playdatesoon." 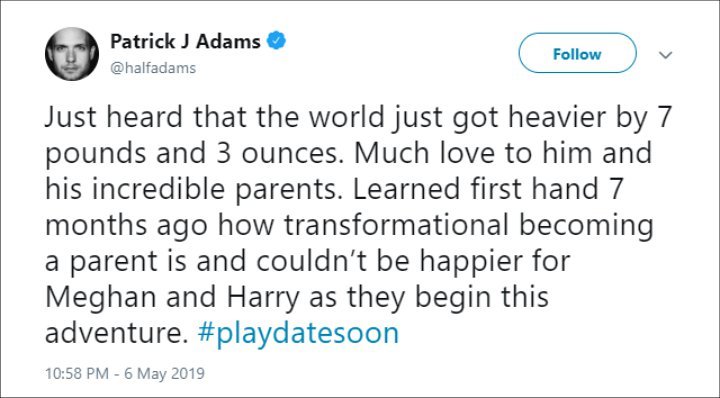 The official "Suits" Twitter account also congratulated the former actress, writing: "The entire #Suits family sends their congratulations to The Duke and Duchess of Sussex, Prince Harry and Meghan Markle, on the birth of their baby boy!" 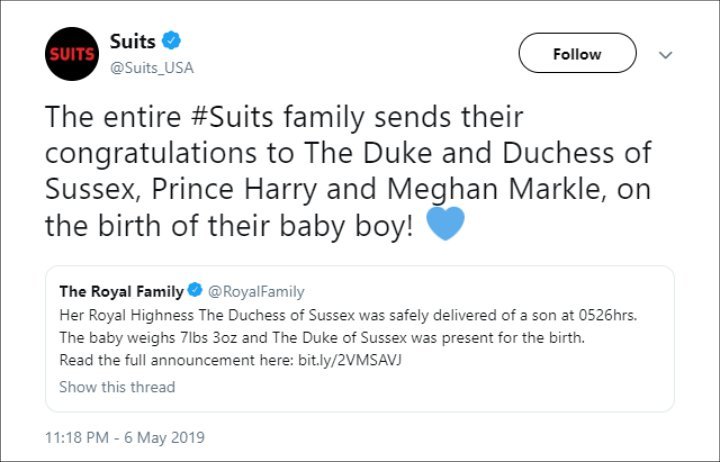 Following the baby's birth, a statement was released in which Meghan's mother Doria Ragland stated that she was "overjoyed" to welcome her first grandchild into the world. However, Meghan's father Thomas Markle, who notoriously fell out with the royal family after staging paparazzi pictures prior to his daughter's wedding to Harry last year, was conspicuously absent from the statement.

Speaking to Britain's The Sun about the new arrival, Thomas said: "I'm delighted to hear that mother and child are doing well. I am proud that my new grandson is born into the British royal family and I am sure that he will grow up to serve the crown and the people of Britain with grace, dignity, and honour."

"God bless the child and I wish him health and happiness, and my congratulations to my lovely daughter Duchess Meghan and Prince Harry, and God save the Queen."

John Singleton's Children Lawyer Up to Fight Over His $35 Million Estate?

Patrick J. Adams Tells Meghan Markle's Trolls to Do 'Better Things' Instead of Hating Her

Patrick J. Adams to Star in Broadway Revival of 'Take Me Out'