Does 'Marvel's Agents of S.H.I.E.L.D.' Tease the Death of a Major Character?

In the Friday, January 19 episode, Robin told May that the last time anybody saw her, Coulson, Daisy, Fitz, Simmons, Mack and Yo-Yo together was before the intense season 4 cliffhanger.

AceShowbiz - The latest episode of "Marvel's Agents of S.H.I.E.L.D." titled "The Last Day" took everything to a dark turn. And what could be worse than a death of a major character?

[SPOILER ALERT!] The Friday, January 19 episode of the series might indicate that one of the major characters would be killed off sometime in the future. Robin, whose Inhuman abilities allow her to see the past, the present and the future in one big jumble, revealed to May earlier in the episode that the last time anybody saw her, Coulson, Daisy, Fitz, Simmons, Mack and Yo-Yo together was when they had a dinner before the intense season 4 cliffhanger.

Fans were left wondering if her prophecy meant that one of the group members would die when the rest of them return to 2017 after being sent 74 years into the future to save the day.

The episode offered several glimpses into the future through Robin's visions, and May was seen with Robin all along, ruling out the possibility that it might be May. It seemingly was not Simmons as well, since she was revealed to be alive post-apocalypse on the Zephyr. As for Fitz, he was seen alive and around while wearing a wedding ring.

Another vision confirmed that it was Yo-Yo. Meanwhile, Daisy's fate was revealed to be quite complicated and intriguing. In Robin's vision, the other survivors in the Zephyr circa 2091 decided to kill her before she could be back in time and destroy the world. However, a man showed her a video which proved that she was present in the past.

It left Mack and Coulson with uncertain fates. Another vision saw Yo-Yo carrying Mack's beloved shotgun axe with May reminding Yo-Yo that Mack was "gone." May didn't explicitly state that Mack was dead, but judging from her tone and expression, many fans assumed that something horrible happened to him. While nothing in the vision strongly indicated that Coulson was killed, he was noticeably absent from Robin's vision which might mean that he was not in a better situation than Mack.

To learn more about the possible death of a major character, fans are left with no option rather than wait and see. Season 5 of "Marvel's Agents of S.H.I.E.L.D." airs on Fridays at 9 P.M. on ABC.

'Marvel's Agents of S.H.I.E.L.D.' Renewed for Season 7 Ahead of Season 6 Premiere

'Marvel's Agents of S.H.I.E.L.D.' Renewed for Shortened Season 6 by ABC 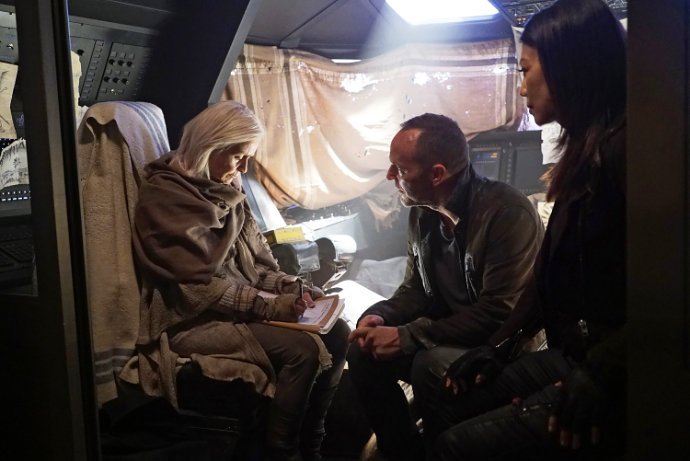 Does 'Marvel's Agents of S.H.I.E.L.D.' Tease the Death of a Major Character?