Apparently realizing that her bare backside pose is similar to Kim's on her iconic Paper cover last year, the 'Stars Are Blind' singer doesn't post the picture on Instagram.

AceShowbiz - Paris Hilton follows in Kim Kardashian's footsteps by exposing her derriere for Paper magazine. Unlike the "Keeping Up with the Kardashians" star, the Hilton hotel heiress tries to remain low-key by covering her front part in the magazine's Fandemonium issue.

In one of the photos for the magazine, Paris wears backless pale green jumpsuit flaunting her pert derriere. While she bends her head over the shoulder, she doesn't look at the camera. The blonde beauty puts on black lipstick and wears silver heels in the said photo. Apparently realizing that her pose is similar to Kim's on her iconic Paper cover last year, the "Stars Are Blind" singer doesn't post it on Instagram. 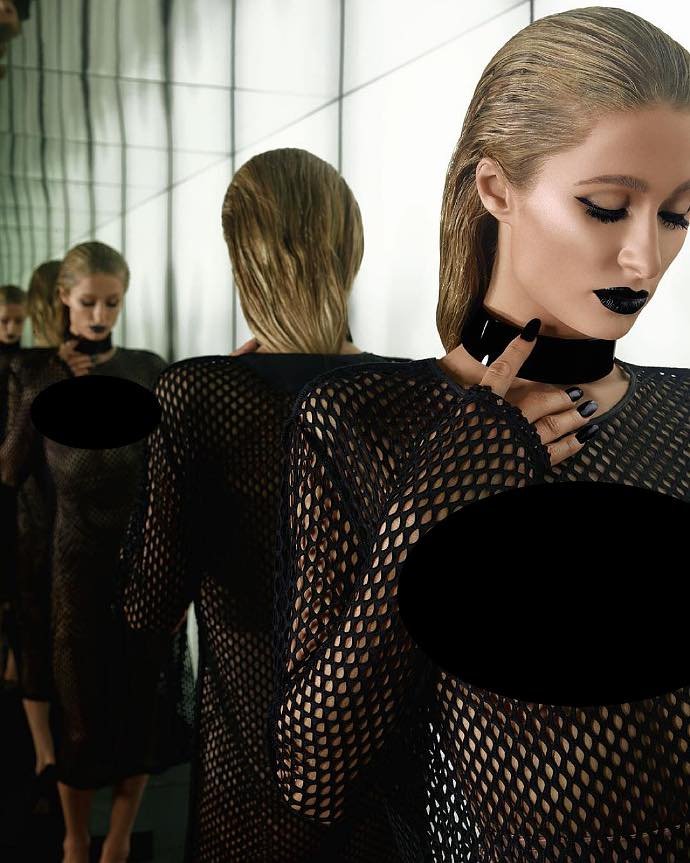 Another photo shows Paris wearing black long-sleeved netted dress flashing her assets. Similar to the previous photo, the 34-year-old socialite avoids looking at the camera. Meanwhile, a photo of her for the magazine's cover sees her covering her body. She gorgeously sits down in a white furry dress.

In an interview with the magazine, Paris reveals she will "get glammed and dressed up in a beautiful sparkly gown" if she wants to get attention. As a person who lives in the spotlight, she admits that she doesn't really pay attention to negative comments people make about her. However, she opens up, "There have been so many weird lies written about me, but one of the weirdest was when they wrote that I dated Michael Jackson."

Paris also says that she's too scared to join online dating. "No, I never have [joined online dating]. I would be too scared of stalkers. I've heard some crazy stories from my friends!" she says. Regarding Wikipedia page about her, she cheekily admits that she wants to edit it by herself.