AceShowbiz - Tom Felton and Elizabeth Olsen went old schooled on the set of their upcoming thriller "Therese Raquin". The two were photographed donning all-out period costumes when shooting a scene for the Charlie Stratton-directed movie in Budapest, Hungary on Sunday, June 3.

Ditching his signature blond locks, the Draco Malfoy of the "Harry Potter" film series was snapped sporting darker hair and rocking a long-sleeved shirt that he paired with a black vest and brown trousers. At one point, he was spotted taking some pictures of the location with his phone.

Elizabeth, on the other hand, looked gorgeous in a dark-colored ball gown with a lace collar. Also spotted on the set was Jessica Lange, who looked pretty in a dark brown period dress that she paired with a matching cape and a plaited bag.

Set in the 1867 Paris, "Therese Raquin" follows young Therese (Elizabeth) who is forced by her aunt Madamme Raquin (Jessica) into a loveless marriage to her sick, spoiled first cousin (Tom). Therese soon becomes obsessed with her husband's friend Laurent (Oscar Isaac) and is pulled into a devastating affair with him that unravels all of their lives.

Along with Laurent, Therese then murders her husband. However, as she finally gets married to her lover, she is haunted by the ghost of her dead husband. The situation soon ruins her marriage life and poisons her love into all-consuming hatred.

Acclaimed theater director Stratton provides the screenplay in addition to serving behind the lens. Also supporting the forthcoming movie are Shirley Henderson, Matt Lucas and Mackenzie Crook. The flick still hasn't got a U.S. release date. 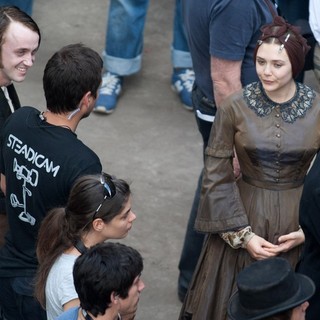 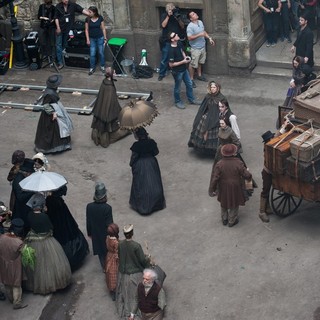 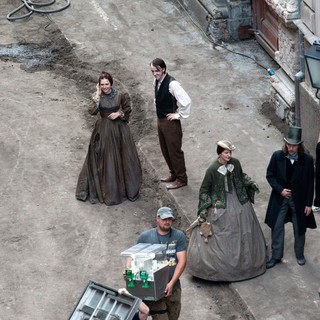