Portraying the TV remake's villain Veronica Cale, Hurley gave a brief interview to the press before leaving in a luxury car.

AceShowbiz - Elizabeth Hurley began filming her part on the new "Wonder Woman" series on Tuesday, March 15 in Los Angeles' 5th street and would be back on the set the next day. A series of pictures captured the 45-year-old British actress dressing up in a sexy teal bandage dress and getting inside a Rolls Royce.

Hurley, who plays the show's villain Veronica Cale, was rehearsing her line before the director said "action". Her scene involves her character giving an interview to journalists cramping outside her car. Hurley later tweeted, "First scene in the can. Phew," before explaining, "Er.....'in the can' means 'successfully completed'.....u knew that."

Cale, according to the breakdown, is "beautiful, highly-educated, highly accomplished". She runs one of the biggest pharmaceutical companies in the country, but she's afflicted with the serious deep-seated Wonder Woman envy. Whatever she is, or will be in life...she'll never be her. And it causes her innards to rot. She loves men, but likes women. There might be an unstated chemistry between her and Wonder Woman, at least on her side.

Adrianne Palicki has been cast as the titular role in the remake project by David E. Kelley. 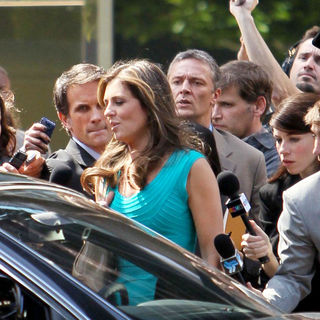 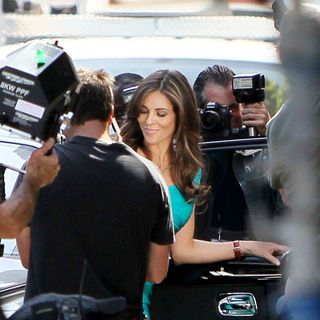 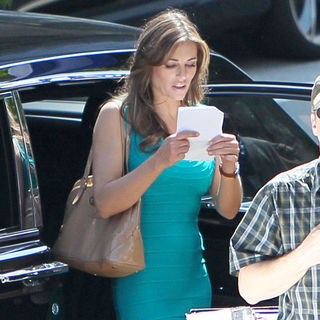