Pics: Jeremy Renner and Tom Cruise Get Wet on Set of 'Mission: Impossible 4'

The new cast member and the depicter of Ethan Hunt soaked in cold water while filming for the movie in Prague, Czech on Saturday, October 16 night.

AceShowbiz - Jeremy Renner and Tom Cruise have been hard at work on the set of "Mission: Impossible IV". On Saturday, October 16, the two actors filmed their scene in the Vltava River, in Prague, Czech, where the temperature is in the 30's Fahrenheit at night.

As if the low temperature was not torturing enough, during the night shooting Renner and Cruise soaked in the water with the former still wearing a suit. Cruise, meanwhile, was seen donning a black leather jacket.

Beside Jeremy Renner and Tom Cruise, Josh Holloway and Lea Seydoux have been spotted joining the production of the fourth "Mission: Impossible" movie in Czech on October 14. Meanwhile, other stars cast in the film include Paula Patton, Ving Rhames, Simon Pegg and Michael Nyqvist.

"Mission: Impossible IV" is made under the direction of Brad Bird with Josh Applebaum and Andre Nemec writing the script. This action movie is slated for December 16 release in the U.S. 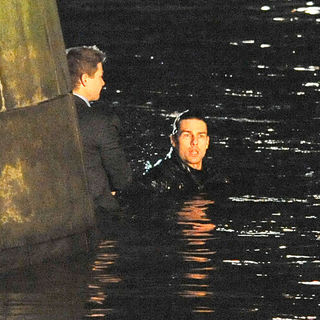